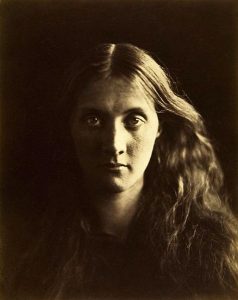 Casting around for a book to write after I finished The Perfect Man, my life of Victorian strongman Eugen Sandow, I thought that my sainted publisher (aka Catherine Pope of Victorian Secrets and this blog) might be interested in the tale of the seven Pattle sisters who in their day were more celebrated that the Mitford sisters in the twentieth century.

The most enduringly famous of the sisters is Julia Margaret Cameron (1815-1879), whose photographs are on display at the Victoria and Albert Museum until February 21. She took up photography after being introduced to the new invention by her friend the astronomer Sir John Herschel, and her images of her social circle, from famous men to children and servants, are highly evocative.

Julia Margaret was the fourth of ten children born in early nineteenth century Calcutta to James and Adeline Pattle. The other surviving sisters were Adeline (b.1812), Sarah (b.1816), Maria (b.1818), Louisa (b.1821), Virginia (b.1827) and Sophia (b. 1829). Their grandfather was the Chevalier Antoine de L’Etang, a French aristocrat exiled to India after he flirted excessively with Queen Marie Antoinette when serving as her pageboy. He ended up running a riding school in Pondicherry. Their father was James Pattle, a successful Anglo-Indian merchant who when he died was shipped back to London in a barrel of rum for burial in Camberwell. He was a heavy drinker, and family legend suggests he burst out of the barrel on the way home.

With the exception of Julia, the sisters were renowned for their beauty. When Virginia came to London, the fellow Anglo-Indian William Thackeray was besotted to the extent that he wrote a babbling portrait in Punch. “When she comes into the room, it is like a beautiful air of Mozart breaking on you…[nature] has endowed this young lady with every kind of perfection…a charming face…a perfect form, a pure perception and heart…”

But Thackeray had lost his fortune, and didn’t stand a chance with Virginia. She married Lord Eastor, of Eastnor Castle, who became 3rd Earl Somers. The other sisters all made advantageous matches, Adeline marrying a military man who became a General, Sophia marrying a baronet, Louisa, a High Court Judge, Maria, the distinguished Dr Jackson. Sarah married Henry Thoby Prinsep, Member of the Council of India and Oriental scholar, himself one of seven brothers.

On returning from India, the Prinseps lived at Little Holland Park in Kensington, the place where the artist GF Watts came to tea, met and married Ellen Terry. The marriage lasted one year, but Watts stayed on at Little Holland House for more like twenty. Other guests at the salon included Herschel, Gladstone, Tennyson and Browning, creating the milieu captured in Julia Margaret Cameron’s pictures.

The sisters floated about the gardens, “robed in splendid Venetian draperies…talking with foreign emphatic gestures,” wrote Virginia Woolf.  Woolf’s mother Julia nee Jackson was daughter of Maria nee Pattle, one of the six Pattle sisters, and she was named after her great-aunt Virginia. There is a definite whiff of Pattledom in Virginia Woolf’s writing and style.

The sisters would in theory make a fascinating subject for a group biography, along the lines of Judith Flanders’ Circle of Sisters, which chronicles the lives of the four Macdonald sisters. The Pattles must have written thousands of letters to one another over the years, from India to London and Paris, and there must have been diaries galore. But despite rooting round, I only managed to find partial correspondence from two of the sisters. There was simply not enough material to attempt the book, let alone do a joint biography taking in the seven Prinsep brothers as well, as once crossed my mind.

I wrote a book about Victorian engineers instead.1 I leave the Pattle sisters to a more intrepid biographer, or perhaps to a novelist, who could chronicle the journey from Anglo-India to the fashionable bohemian world of Little Holland House and on another generation or two to the Bloomsbury set.