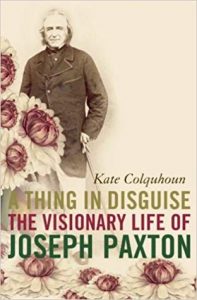 Joseph Paxton (1803-65) was a formidable auto-didact who embodied the Victorian idea of progress. From humble beginnings as the son of a poor farmer, Paxton landed the dream job of gardener to the Duke of Devonshire at the age of just 23. He remained there until the Duke’s death, 32 years later. Although horticulture was his great love, his talents were too diverse for him to remain tied to the land. A practical man who seemed to have a solution to any problem, “ask Paxton” became a national catchphrase. He went on to design mansions, sewage systems, and elaborate hothouses to ensure the wealthy never went without a pineapple.

Of course, Paxton is most famous for making the leap from designing ducal greenhouses to building the extraordinary glass structure that was (dismissively) dubbed the Crystal Palace. All large building projects inspire opprobrium, and there were many who doubted the wisdom of this shimmering edifice. However, given its enduring appeal as a national symbol over 150 years later, it was no white elephant. Paxton’s feat of engineering was quite breathtaking. The Crystal Palace was six times the size of St. Paul’s Cathedral, covering 18 acres, and it was visited by 6 million people eager to see the Great Exhibition of 1851 and the wonders it contained.

Many men would have had their heads turned by such extraordinary and high profile success, but Paxton kept his feet firmly on the ground. When away from home working on pioneering projects, he longed to be back at his beloved Chatsworth. Unusually for such a driven character, he was a devoted husband and father, and seemed to experience almost physical pain when separated from his family.

One of the most compelling aspects of this superb biography is the depiction of Paxton’s relationship with his employer. The unmarried Duke almost worshipped Paxton, lavishing him with gifts and doing everything in his power to keep him at Chatsworth. When in company, the Duke would talk of little other than his gardener’s achievements. Colquhoun avoids making any simplistic interpretation of the Duke’s motives, but the fact that he wrote in his diary “he is everything for me” conveys the poignancy of unrequited love.

Like most workaholics, Paxton had little time to smell his own roses, so his personality complemented perfectly that of the sophisticated Duke, whose vision spurred him on to ever greater achievements. It was a symbiotic relationship, and Paxton comes across as diminished after the Duke’s death in 1858. Needless to say, he wasn’t idle during his remaining years. He served as a Member of Parliament and conceived wide-reaching social projects. Thanks to successful financial speculation, Paxton enjoyed a comfortable life and the satisfaction of a life well lived.

This accomplished biography does justice to the great man and all that he achieved. With a polymath as a subject, Kate Colquhoun had a tough job in encompassing all the worlds that he spanned, but the material is handled with skill and assurance. I hope Colquhoun writes another biography, as she has a talent for evoking the spirit of an age and capturing a sense of the people who inhabited it.

A Thing in Disguise: The Visionary Life of Joseph Paxton is available in paperback and Kindle editions.