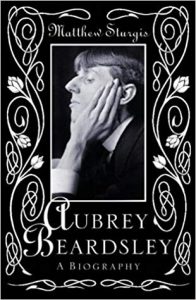 When Aubrey Beardsley died in 1898, he was aged just 25.  Although his career was tragically short, his work epitomises the Fin de Siècle, with its decadent, and sometimes shocking, figures.  Beardsley was born in Brighton in 1872, in the home of his maternal grandparents.  Although his immediate family moved to London soon afterwards, he retained his affinity with Brighton, attending the Grammar School while staying with his aunt.  His school days are described as being unusually happy, and he benefited from the tutelage of the dynamic and progressive headmaster Ebenezer Marshall.  Marshall pushed both pupils and teachers to achieve their full potential, and he had the reputation of a slave driver: “He refused to countenance the establishment of a ‘staff room’, considering that his teachers should be out among their pupils, not skulking in a den consuming tea and digestive biscuits.”

Beardsley’s development was also influenced by his faith.  He attended a small, understated church in the Hanover area of Brighton, two streets from where I live.  My initial delight at discovering this fact was tempered by the biographer’s description of a “poor area of mean two-storey terraces.”  Although the exterior of the church is unremarkable, resembling a medieval barn, the interior features decorations and stained glass by Dante Gabriel Rossetti and Burne-Jones.  Burne-Jones greatly influenced Beardsley’s early work and also became his champion.  He urged him to devote his evenings to studying at art school while continuing to earn a living as an insurance clerk, a job he despised.  Beardsley’s illustrations for Malory’s Morte D’Arthur were thought to be highly derivative of the Pre-Raphaelite Brotherhood, but they also demonstrated his rare talent.  William Morris, however, was distinctly unimpressed, fulminating that “a man ought to do his own work”.

His growing reputation led Beardsley into the fashionable world inhabited by the likes of the literary hostess Ada Leverson, whom Oscar Wilde described as ‘The Sphinx of Modern Life’ and ‘the wittiest woman alive’.  Commissions came flooding in, including one to illustrate George Egerton’s seminal Keynotes.  When Punch later parodied the work as ‘She-Notes’ by Borgia Smudgiton, Beardsley’s fame was assured.  Although apparently heterosexual, Beardsley enjoyed the homosexual milieu, and also had a tendency to go out “dressed up as a tart”.  His fascination with both androgyny and sexuality in general outraged some areas of society.  One publisher, fearful of legal action, took to examining the pictures with a magnifying glass, sometimes spotting non-existent obscenities and missing some of the more obvious sexual imagery.

In 1893, Arthur Symons published an article on ‘The Decadent Movement in Literature’, thus crystallising ideas of what decadence comprised, and establishing a movement that could be both followed and attacked.  The most famous embodiment of the decadent period was The Yellow Book, first published in April 1894.  The yellowness was a deliberate ploy to link it with French novels, which were produced in distinctive yellow wrappers.  French novels had a reputation for being scandalous and outre, qualities Beardsley and his colleagues wanted to emulate.  The chief object of The Yellow Book was to protest against “the story picture” in art and “sloppy sentimentalism and happy endings” in literature.  As his biographer writes, Beardsley had established himself at the “vortex of modernity”.  His work encompassed the New Drama, the New Woman and the New Art – movements Punch referred to collectively as the ‘New Newness’.  The Yellow Book was referred to as a “mighty glow of yellow”, as though “the sun had risen in the West.”  Not all responses were as enthusiastic, however,  the Spectator denouncing the “jaundiced-looking indigestible monster.”  Granta thought is no more than “a collection of semi-obscene, epicene, sham erotic and generally unimportant literary and artistic efforts,” and others demanded an Act of Parliament to “make this sort of thing illegal.”  The controversy, unsurprisingly, fanned the flames of publicity and ensured high sales for the first edition.

Beardsley’s name soon became inextricably linked with The Yellow Book and decadence in general.  Although this made him a figurehead for all that was new and exciting, it also made him a target for the inevitable backlash.  Decadence became the symbol for all that was wrong with society, and the overtly sexual nature of Beardsley’s creations was seen as an expression of its malaise.  Burne-Jones declared his former protégé’s drawings to be “immoral”, and his family were appalled.  Beardsley had been careful to avoid any formal association with Oscar Wilde, although he saw him socially.  Being linked with such a notorious figure was a dangerous business.  Unfortunately, Wilde’s arrest for gross indecency found him with a yellowback novel under his arm, which was assumed to be The Yellow Book. Also, Beardsley had been unable to resist the temptation of illustrating Wilde’s controversial play Salome.  His perceived association with Wilde was disastrous, with so many luminaries lobbying for his downfall, including Mrs Humphry Ward, described here as an “indefatigable busybody”.

Beardsley was forced to retrench and his former brightness was dimmed.  A sporadic sufferer of tuberculosis, his health started to decline and the overwhelming sense of his own mortality prompted a period of religious contemplation and an eventual conversion to Catholicism.  He spent some time convalescing in France, not far from the diminished Oscar Wilde, who was masquerading under the guise of Sebastian Melmoth.  Beardsley deliberately avoided him in the street, still painfully aware of the dangers of being seen with a disgraced figure.  He increasingly clung to his faith and tried to distance himself from some of his most graphic work, pleading with his publisher to destroy it.  Fortunately for posterity, his publisher recognised his talent and quietly disregarded his request.  We’ll never know what Beardsley would have achieved had he enjoyed a longer span on this mortal coil.  However, he inadvertently left a lasting legacy and was a defining figure of the Fin de Siècle.  Matthew Sturgis’ biography does justice to the life and work of the man and is also lavishly illustrated with some of his key works.  There is much to interest both the general reader and those with a more detailed knowledge of the period.