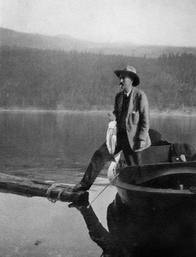 Roberts was born in London on 29 December 1857 to William Henry Roberts, a tax inspector, and his wife Catherine. After gaining a scholarship to Owen’s College in Manchester, Roberts met the author George Gissing, the beginning of a long-lasting friendship. Neither flourished at the college. Gissing was famously expelled and sent to prison for stealing to support a prostitute with whom he had fallen in love. Meanwhile Roberts gave up his studies following an argument with his father. Instead he pursued a very different education, travelling to Australia and working on sheep stations as a sheepshearer, sheepherder, and boundary rider. After two years, he signed up as an able seaman on a London-bound ship, refusing to see lack of experience as a barrier.

Back home, Roberts worked in the civil service – not an ideal role for a man used to the Australian outback and the open seas. After five years, he was back on a boat, this time headed for America.  For the next three years he worked and tramped across the Texan plains right up to the mountains of British Columbia. His varied jobs included herdsman, tree-feller, miner, and farmhand. He laboured on the Canadian Pacific Railway before returning home via San Francisco.

Based in London again and aged 28, Roberts lacked any structure or direction. Gissing suggested that he try writing about his adventures. He immediately started work on The Western Avernus, completing it in just 4 weeks. It was published in 1887 and proved a modest success for the new author. Living a bohemian existence in Chelsea lodgings, Roberts wrote articles about his itinerant days and sold them to magazines. In 1890 he published his first novel, In Low Relief, and this marked the beginning of three decades of literary success. His books were well reviewed, critics clearly impressed by this author whose life was as adventurous as his tales. A journalist in the Melbourne Age wrote: “He is a tall, good looking man, apparently on the sunny side of 40, looks as little like a writer and as much like a man of action as one could wish.” Roberts might have marketed himself as a man’s man, yet he was also a keen supporter of women’s suffrage and female emancipation.

In 1889 Roberts had fallen in love with Alice Hamlyn, a woman with three children and a violent husband. As divorce was expensive and morally unacceptable, they pursued a hopeless affair for years until Alice was released by her husband’s death. Thereafter, Roberts enjoyed only sporadic happiness. Gissing died in 1903, and in 1909 his stepdaughter died following an appendix operation. A near fatal bout of appendicitis left Roberts almost ruined, as he was unable to work for months. He sought financial assistance from the Royal Literary Fund, already suffering from waning popularity. Following his wife’s death in 1911, Roberts lived on with his remaining stepdaughter, Naomi, in a Belsize Park flat. The receipt of a small civil list helped them eke out an existence in a market that no longer wanted Roberts’s fiction. Naomi died of cancer in 1941, and Roberts followed eight months later, on 8 June 1942. He died alone at the age of 84, having outlived both his family and his literary fame.

Roberts’s writing career spanned sixty years, during which he wrote over 300 stories, thirty-two novels, three collections of poetry, two biographies, five travel books, five science books, and 200 articles. Like many authors of the period, he wrote far too much. Although much of his output was motivated by profit rather than posterity, some of his works retains strong historical interest. He is remembered now only as the friend and first biographer of Gissing, but he deserves to be acknowledged, too, as a fine writer of short stories.