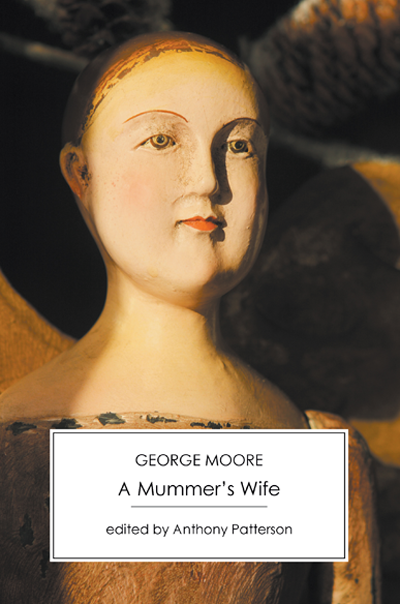 edited with an introduction and notes by Anthony Patterson, and including the full text of Literature at Nurse

A Mummer’s Wife (1885) was recognised by W B Yeats as the first Naturalist novel written in English and he forbade his sister to read it.  It was originally published by Henry Vizetelly, who was later imprisoned for publishing English translations of Zola’s novels.

Moore’s novel tells the story of Kate Ede, a bored Midlands housewife unhappily married to an asthmatic draper.  When a handsome travelling actor comes to lodge with her family, she succumbs to temptation, with disastrous consequences.

A Mummer’s Wife is a significant novel both in terms of its innovative style and in the history of literary censorship.  Mudie’s decision to ban it from his famous circulating library prompted a virulent attack by Moore in his pamphlet Literature at Nurse.  Moore defends the sexual content of his novel, comparing it with the sensation fiction approved by Mudie.

In his introduction, Anthony Patterson relates the novel to broader issues of literary production and censorship.  He demonstrates how A Mummer’s Wife is a fictional assault on the romantic novel but still subscribes to gendered views of the dangers of reading for women, with its echoes of Madame Bovary.

Anthony Patterson graduated with a PhD from Durham University in 2008, and has recently taught at the universities of Sunderland, Northumbria and Durham.  He is currently working on a monograph on literary censorship, and has also contributed a chapter to the forthcoming George Gissing and Women (ed. Christine Huguet and Simon J James).