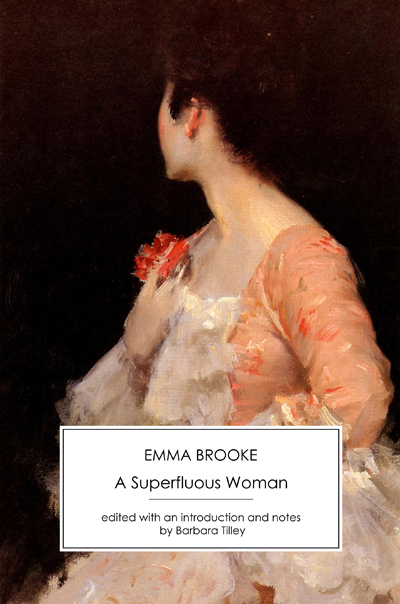 edited with an introduction & notes by Barbara Tilley

Aristocratic Jessamine Halliday, suffering a “splenetic seizure” brought on by high breeding, is prescribed a therapeutic break in the Scottish Highlands. While there, she falls in love with handsome crofter Colin Macgillvray and makes an indecent proposal by offering him the “unconditional surrender” of her body but refusing to give her hand in marriage. A Superfluous Woman is an audacious exploration of the fin-de-siècle preoccupation with race, class, and the sexual double standard.

Unsurprisingly, Brooke’s novel caused outrage among critics. Campaigner W. T. Stead denounced it as “an immoral tale,” and The Times lamented its distinctly feminist message. This reaction, and Brooke’s boldness, ensured that it became one of the best-selling New Woman novels of the 1890s.

Barbara Tilley is a Visiting Assistant Professor at DePaul University in Chicago. She is in the Writing, Rhetoric and Discourse department where she teaches a range of first-year writing courses. Her literary background is in the long nineteenth century and she has published short pieces on John Keats and the Lake School poets. She is currently working on a critical biography of Emma Brooke, which focuses on Brooke’s socialist politics as they relate to her interests in and promotion of women and worker’s rights during her lifetime. Tilley is examining Brooke’s central and active leadership within the Fabian Society and the Fabian Women’s Group between 1885 and 1918. Included in the book will be an exploration of Brooke’s most important relationships with those writers and intellectuals whom she befriended in the early years of the Fabian Society, including George Bernard Shaw, Sidney and Beatrice Webb, and Edward Pease.

“Here we have a lovely edition which has an informative introduction as well as appendices. This kindle version also has an active table of contents as well as active footnotes.” Amazon review

“Perfect book for those interested in the Victorian socialist feminist scene.” Amazon review

“This is an unusually well-researched book about a woman writer heretofore ignored.” Amazon review