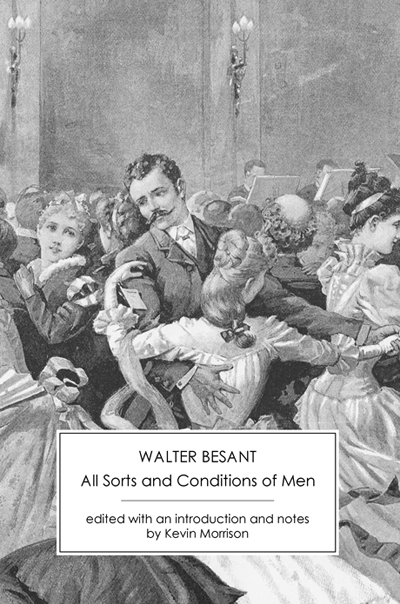 edited with an introduction and notes by Kevin A. Morrison

First published in 1882, All Sorts and Conditions of Men chronicles daily life in the East-end district of Whitechapel Road, where people go about their business with an air of quiet resignation. Their lives are transformed by the arrival of Angela Messenger, a young Girton-educated  heiress who assumes the identity of a dressmaker so that she might gain an understanding of this “striving, eager, anxious humanity”. Meanwhile, Harry Goslett learns he is not an aristocrat but the son of a lowly army sergeant. Determined to return to his true roots, he moves to the East End, ending up in the same boarding house as Miss Messenger. The two discover a mutual interest in social reform, imagining a Palace of Delight to provide “a little more of the pleasures and graces of delight” for the local community.

All Sorts and Conditions of Men combines the biting wit and social criticism of Dickens with the deft plotting of Shakespeare’s comedies. Whereas much of the fiction centred on the East End during this period catalogued scenes of sexual depravity and noisome slums, Besant’s novel depicts the respectable working classes and their relentless industry. Lamenting their monotonous existence and joyless surroundings, Besant argues for benevolent employers and better living conditions.

Although subtitled ‘An Impossible Story’, the novel inspired the building of the People’s Palace on Mile End Road, opened by Queen Victoria on 14 May 1887. The palace housed a concert hall/ballroom, a gymnasium, a library, a swimming pool, an art school, and a technical college. All Sorts and Conditions of Men is certainly a novel with a purpose, but one that achieved it aims in a remarkable legacy.

Kevin A. Morrison is an assistant professor of English at Syracuse University. He has written widely on the literature and culture of Victorian Britain and is currently completing a book manuscript tentatively titled Frames of Mind: A Material History of Liberal Cognition. His interest in Besant stems from a second book project, a study of the celebrity culture of Victorian social reform.