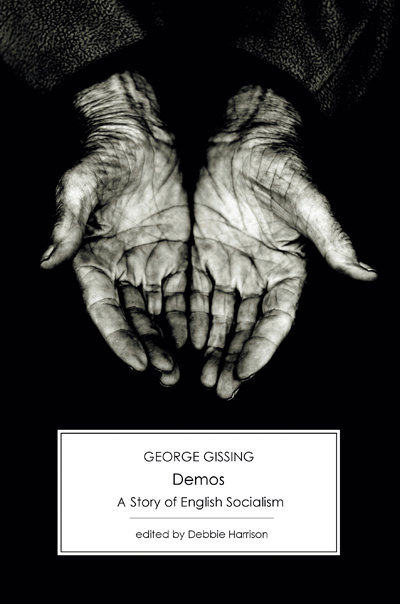 “…this detailed edition of Demos may earn him new readers.” Robert Giddings, Tribune

Thanks to a missing will, London mechanic and ardent socialist Richard Mutimer unexpectedly inherits a fortune at the expense of the presumed heir, aristocratic Hubert Eldon. Mutimer leaves behind his old life to establish a model village for ironworkers in the idyllic Midland town of Wanley. He also deserts the girl who loves him, as he seeks to assume the social status of the middle-class capitalists he once despised.

Against the vivid background of the political and social upheavals of the mid-1880s, in Demos Gissing weaves an electrifying story of ambition, betrayal, love and loss. The novel offers one of the most penetrating analyses of London’s poor and working classes in late-Victorian fiction and delivers an unsettling critique of the English socialist movement at a pivotal point in its history. Gissing’s rage against the social and economic system that creates appalling poverty is palpable, and he depicts human suffering with exquisite poignancy in scenes that are among the most beautiful in the English language.

Demos has been described as one of Gissing’s finest novels, and this is the first critical edition since 1972.

The text is that of the first edition published by Smith, Elder in 1886, and includes:

A list of websites used in the edition is available online.

Debbie Harrison is an Honorary Research Fellow at Birkbeck College, University of London, where she is currently working on her monograph, A Victorian Hangover: Narratives of Addiction 1830-1900. Her research focuses on the interface between literature, medicine and social science in the nineteenth century.

“Hugely well edited and annotated. Lots of biographical (and accurate) info and an expert Preface (by the Gissing scholar Pierre Coustillas) and a clever Intro and annotation by Debbie Harrison. A must read.” Amazon reviewer

“The book remains rewarding and deserves to be remembered. Victorian Secrets Ltd. has done a great service in making the novel available in this excellent new edition.” Amazon reviewer