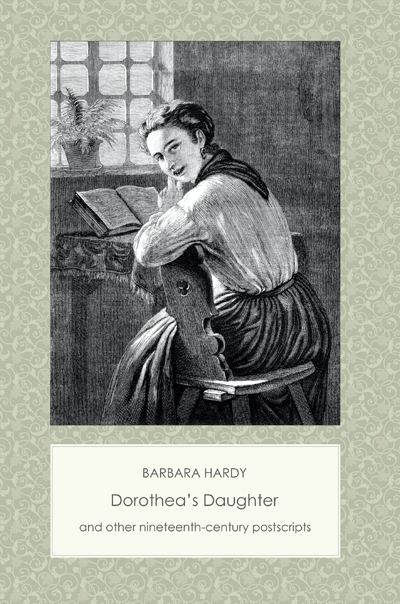 Dorothea’s Daughter is a stunning new collection of short stories based on novels by Jane Austen, Charlotte Brontë, Charles Dickens, George Eliot, and Thomas Hardy. They are postscripts, rather than sequels, entering into dialogues with the original narratives by developing suggestions in the text. The authors’ conclusions are respected, with no changes made to the plot; instead, Barbara Hardy draws out loose threads in the original fabric to weave new material, imagining moments in the characters’ future lives.

Barbara Hardy has been a literary critic for over fifty years, specialising in the Victorian novel, theory of narrative and lyric, but also writing studies of Shakespeare, Jane Austen, and Dylan Thomas. Her recent books on George Eliot and Dickens continue the close analysis – once out of fashion but coming back – which has always marked her work, with an fresh emphasis on the artist’s explicit and  implicit analysis of creativity. She has published many reviews and articles, two books of poetry, a memoir and a novel, teaches and takes workshops, and is interested in the crossover of literary criticism and creative writing. She is working on Elizabeth Gaskell and a sequence of poems about Dante.

She is Professor Emeritus at Birkbeck, University of London, Honorary Professor at Swansea , University of Wales,  Fellow of the British Academy, the Royal Society of Literature, and the Universities of Wales, Swansea, Swansea Metropolitan, Royal Holloway, and Birkbeck, and an Honorary Member of the Modern Languages Association.