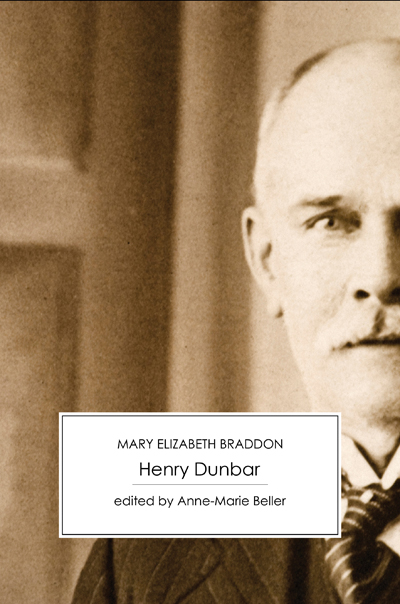 edited with an introduction and notes by Anne-Marie Beller

First published in 1864, Henry Dunbar includes all the classic ingredients of a sensation novel, including murder, fraud, mistaken identity, and a train accident.  The dramatic nature of the tale led to it being adapted for the stage, most notably by Tom Taylor, with Henry Neville and Kate Terry in the lead roles.

Some contemporary critics were horrified by this “tale of crime”, but modern readers will enjoy a thumping good story and an early example of the great British detective novel.  The Era awarded the novel qualified praise, commenting:

In our opinion, the story of Henry Dunbar is superior to Lady Audley’s Secret, or any other novel that we have seen from the pen of its author.  She has retained all her excellence of plot, her strength, her animal vivacity and boldness of incidents; and has lost much crudeness and other defects likely to appear in early writings.

The Year’s Work in English Studies praised the “useful introduction” and “fascinating, helpful notes”, calling it an “excellent edition”.

Anne-Marie Beller is a lecturer in the department of English and Drama at Loughborough University. Her publications include a forthcoming monograph for Ashgate’s 19th century series, Mary Elizabeth Braddon: Writing in the Margins, and also a comprehensive companion to Braddon’s work for McFarland. Anne-Marie has published articles and chapters on Wilkie Collins and Ellen Wood, as well as Braddon, and is contributing chapters on Amelia B. Edwards and Braddon’s Joshua Haggard’s Daughter to the forthcoming Blackwell Companion to Sensation Fiction.

Anon. “How to Make a Novel: A Sensational Song”. Examiner, April 30 1864
Anon. From “Recipes for Authors”, The Tomahawk: A Saturday Journal of Satire 1, ed. Arthur William A’Beckett. 11 May, 1867
Appendix C – Dramatic Adaptations of Henry Dunbar
From Henry Dunbar, or A Daughter’s Trial (1865), by Tom Taylor
From “Olympic Theatre.” The Morning Post, Monday 11 December 1865

“Henry Dunbar is well worth a read for anyone interested in sensation fiction and this is an excellent critical edition of the text, ideal for anyone studying, teaching or reading the novel for pleasure. The introduction and critical notes provided by Anne-Marie Beller are detailed and informative, with some useful supplementary material in the appendices which would be particularly helpful for teaching the text. The edition is well presented overall – the text is clear and readable (the font size isn’t small or cramped at all – much better than some scholarly presses) and it’s a good-quality copy all round.” Amazon reviewer

“The plot is complex, sophisticated, both romantic and thought-provoking, and steeped in psychological realism. It includes a clever detective and a high-principled, amazingly courageous heroine. Henry Dunbar was a great success with readers in its day and richly deserves its revival. The scholarly preface (which should be read last) explores the novel as a fictional commentary on Victorian attitudes to class, gender and crime. I loved the book and strongly recommend reading it in this superior format, with its pleasant typeface and excellent introduction.” Amazon reviewer