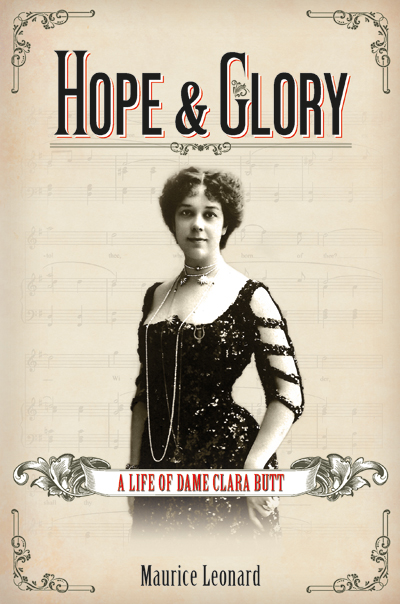 Dame Clara Butt (1872-1936) was one of the most celebrated singers of the Victorian and Edwardian eras, a symbol of the glory of a Britain on whose Empire the sun never set. Standing an Amazonian 6’2” tall, Clara had a glorious contralto voice of such power that when she sang in Dover, Sir Thomas Beecham swore she could be heard in Calais. A friend of the royal family, Clara was made a Dame in recognition of her sterling work during the First World War. Her rousing performances of Land of Hope and Glory brought the nation together and raised thousands of pounds for charity.

Clara’s origins were far from grand. Her father was a trawlerman and she would have been born at sea had he not made an emergency landing near Brighton. The Butts, who went on to have ten more children, soon moved to Bristol, a city that remained close to Clara’s heart until the end of her days. Recognising her burgeoning talent, the local community clubbed together to support Clara’s training after she was offered a prestigious scholarship at the Royal College of Music. To show her gratitude, Clara later chose to be married at Bristol Cathedral, even though she had been offered St. Paul’s in London. Such was her fame by this stage, Sir Arthur Sullivan composed an anthem for the occasion, special trains were run from London, and a halfday holiday was given to workers.

Filling concert halls throughout the world, Clara was one of the first singers to undertake international tours, visiting Canada, Australia, New Zealand, South Africa, and Japan. She travelled with an entourage of over twenty people who fulfilled her every need. Her demands were many, but Clara never failed to delight her adoring audiences. At the height of her career, Clara was locked in rivalry with the celebrated soprano Nellie Melba, almost ending in a libel case when Clara wrote her memoirs.

Although Clara’s incredible talent brought her much joy, she also suffered great tragedy in her personal life, losing two of her children and enduring crippling back pain. She sought solace in Theosophy, travelling to India, where she met Mahatma Gandhi and the socialist reformer Annie Besant.

A professional to the very end, Clara collapsed on her final tour of Australia and had to be brought home on a stretcher. Diagnosed with a virulent form of spinal cancer, Clara died with courage, the same week as both George V and Rudyard Kipling.  A brilliant singer and an extraordinary woman, Dame Clara Butt was the epitome of a bygone age.

In the first biography since her death, Maurice Leonard tells Dame Clara Butt’s remarkable story, from humble beginnings in Sussex, to her dazzling apotheosis by an adoring nation. With humour and insight, Leonard reveals the woman behind the cultural icon.

Maurice Leonard was for many years a television producer, working on shows such as What’s My Line, This is Your Life, and Strike it Lucky, and studied singing with the Maryinsky soprano Oda Slobodskaya.  His previous books include biographies of Kathleen Ferrier, Mae West, Montgomery Clift, Dame Alicia Markova, Oda Slobodskaya, and People from the Other Side: The Enigmatic Fox Sisters.