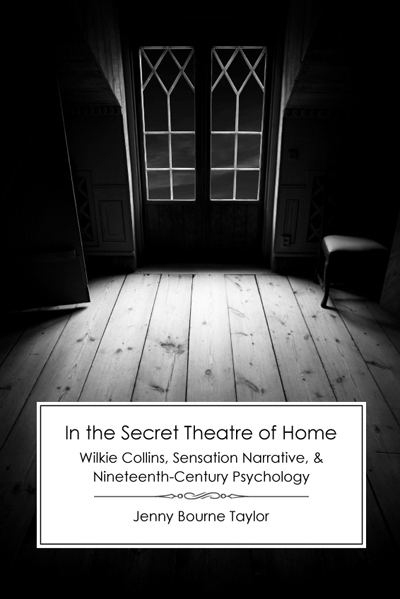 In his 1852 novel Basil, Wilkie Collins’ narrator concludes that “those ghastly heart-tragedies laid open before me … are not to be written, but … are acted and reacted, scene by scene, year by year, in the secret theatre of home.” Taking this memorable quote as her starting point, Jenny Bourne Taylor demonstrates how Victorian psychology is central to an understanding of the complexity and vitality of Collins’ fiction, exploring the boundaries of mind/body, sanity/madness, and consciousness/unconsciousness.

Taylor’s depth of research and thoughtful analysis establishes the importance of Collins as a writer whose fiction challenges the cultural constructions of the nineteenth century, and proves “the impossibility of drawing a precise boundary between fictional and psychological codes”. Going beyond conventional discussion of the sensation genre, here we see the depth and range of Collins’ writing and gain an understanding of its relation to Victorian medical thought.

Introduction – Collins as a sensation novelist

Chapter 1 – The psychic and the social: Boundaries of identity in nineteenth-century psychology

Chapter 2 – Nervous fancies of hypochondriacal bachelors – Basil, and the problems of modern life

Chapter 6 – Lost parcel or hidden soul? Detecting the unconscious in The Moonstone

Jenny Bourne Taylor is a Professor Emerita at the University of Sussex. She has written widely on nineteenth-century literature and culture, and her publications include, ed, with Sally Shuttleworth, Embodied Selves: An Anthology of Psychological Texts 1830-1890; ed. The Cambridge Companion to Wilkie Collins (Cambridge University Press, 2006); ed. with Martin Ryle, George Gissing, Voices of the Unclassed (Ashgate, 2005); ed.,with Margot Finn and Michael Lobban, Legitimacy and Illegitimacy in Nineteenth-Century Law, Literature and History (Palgrave Macmillan, 2010) and ed., with John Kucich, The Oxford History of the Novel in English volume 3, The Nineteenth-Century Novel 1830-1880 (Oxford University Press, 2012). Now retired, she lives in London and is active in environmental and refugee support campaigns.