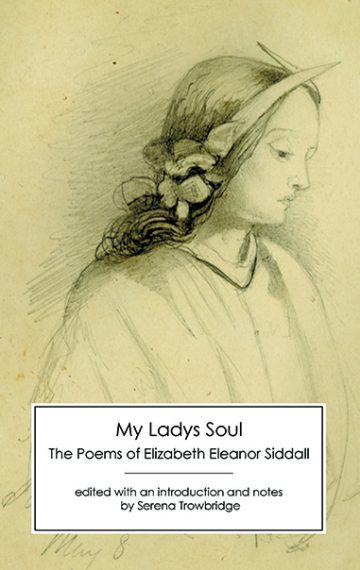 Elizabeth Siddall is best known as the muse and model for many Pre-Raphaelite artists and as the wife of Dante Gabriel Rossetti.  However, she was also an artist and a poet.  This book publishes all her extant poetry in a single volume for the first time.  Serena Trowbridge has undertaken extensive archival research to restore Siddall’s better-known poems – often heavily edited in previous publications – to their original form, and to identify and reproduce poems and fragments not previously included in anthologies.  Elizabeth Siddall’s own voice emerges fully from these pages, supporting her rediscovery as a creative artist in her own right.

Each poem is accompanied by notes and analysis, and the detailed introduction, extensive bibliography, and biographical timeline position Siddall in her historical, literary and critical contexts. Appendices include a previously unpublished letter from Siddall and poems by other writers that relate to her life and work. The book is illustrated with portraits of Siddall and examples of her own art.

Dr. Serena Trowbridge is Senior Lecturer in English Literature at Birmingham City University. Her monograph, Christina Rossetti’s Gothic (Bloomsbury), was published in 2013, and other publications include ‘Past, present, and future death in the graveyard’ in Gothic and Death, ed. Carol Davison (Manchester University Press, 2017), ‘“Truth to Nature”: The Pleasures and Dangers of the Environment in Christina Rossetti’s Poetry’ in Victorians and the Environment, ed. Lawrence Mazzeno (Ashgate, 2017), Insanity and the Lunatic Asylum (edited with Thomas Knowles), (Pickering & Chatto, 2014) and Pre-Raphaelite Masculinities (edited with Amelia Yeates), (Ashgate, 2014). Serena was editor of the Review of the Pre-Raphaelite Society 2005-2017.

Appendix A: Autograph letter signed to Georgiana Burne-Jones, 12 March 1861
Appendix B: Poems frequently associated with Siddall and her own writing
Appendix C: The Cold Wedding by William Allingham

“Taken as whole, the impression is one of a poet who was struggling to find, and occasionally did find, her own voice. Surrounded by the male mega-talents of the Pre-Raphaelites and working in the shadow of Tennyson’s sonorous example, it is remarkable that she managed to write anything at all, let alone the small, touching poems found here. Re-discovering her work completes the Pre-Raphaelite story, placing her in a wider tradition, and Serena Trowbridge has done a fine job in bringing them to our attention.” Simon Cooke, The Pre-Raphaelite Review

“Reading this book felt like a rare and wondrous gift. It is written with an intimacy that drew me in to Siddall’s words, and I dove headfirst into Serena’s keen analysis. She has put Siddall’s work into context and shares details about each poem that have deepened both my respect and understanding for a woman who has long haunted me.” Amazon reviewer