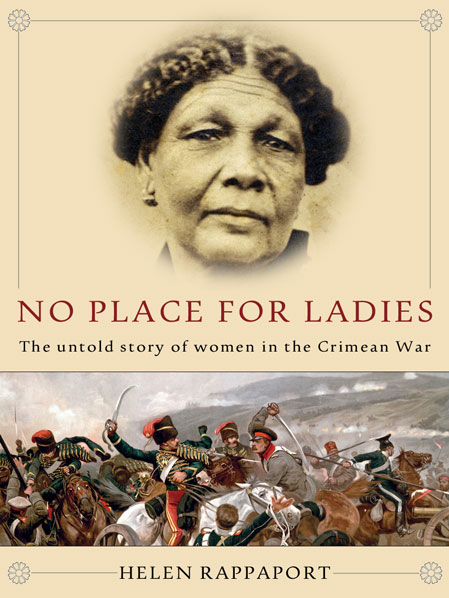 Publishing rights for this title have now reverted to the author. It is no longer available through Victorian Secrets

History views the Crimean War as a conflict marred by bungling, and many British officers emerged with their reputations in tatters. While military glory was lacking, nurses came to symbolise the glory of empire, working long hours in filthy conditions to tend the wounded and dying. Elsewhere, courageous women such as officer’s wife Fanny Duberly provided harrowing eye-witness reports of the atrocities of war.

The pioneering work of Florence Nightingale has become legendary, but in No Place for Ladies Helen Rappaport champions the contribution of the women whose stories have gone largely untold – the nurses, cantinières and army wives who played a vital, but often overlooked, role in the theatres of war. Mary Seacole’s establishment of ‘The British Hotel’ near Balaclava supplied fatigued soldiers with much-needed comforts and medical attention, earning her the love and respect of many men, but no official recognition.  This book gives her achievements the attention they deserve.

No Place for Ladies is a vivid, poignant and often haunting account of remarkable women in extraordinary circumstances.

Helen Rappaport is an acclaimed historian, biography and Russianist, specialising in the Victorian period and revolutionary Russia. Her recent books include Ekaterinburg: The Last Days of the Romanovs and Magnificent Obsession: Victoria, Albert and the Death that Changed the Monarchy. April 2013 will see the publication of Capturing the Light: A True Story of Genius, Rivalry and the Birth of Photography, co-authored with Roger Watson. Find out more at www.helenrappaport.com.

Praise for No Place for Ladies

Poignant and inspirational, well researched yet thoroughly readable, No Place for Ladies is the untold story of war, love, death – and the brave women, from nurses to countesses, who went out to the Crimea. Simon Sebag Montefiore

Fascinating…the author has made excellent use of [the diaries and letters].Rappaport weaves their stories into the text without sentimentality; the facts speak for themselves. Alan Mallinson, Times

Helen Rappaport in her wide-ranging and informative book…brings together material from many scattered sources to provide a comprehensive and fascinating picture of the varied roles [women] undertook…she cuts through the myth and soft-focus hagiography that has built up around…Florence Nightingale and Mary Seacole. Christine Kelly, Literary Review