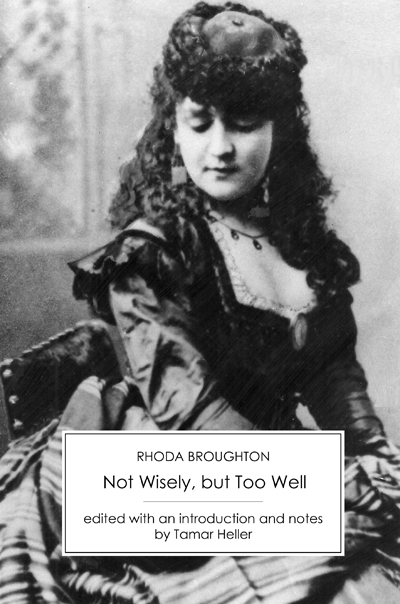 edited with an introduction and notes by Tamar Heller

Since this time yesterday she had made the pleasing discovery that she was fast falling in love violently, and as it now appeared unrequitedly, with a man her superior in station, and in every respect unlikely to prove a satisfactory object for that passion which forms the main plot of a woman’s life, and is only a small secondary byplay in a man’s. Yes, the play of her life had begun, and whether it was to be a tragedy or a comedy who could tell?

“The most thoroughly sensual tale I have read in English for a long time,” complained Geraldine Jewsbury in her reader’s report on Rhoda Broughton’s Not Wisely, but Too Well (1867). Initially serialised in The Dublin University Magazine, the novel had been brought to the attention of the publisher Bentley and Son by its editor, J S Le Fanu, who also happened to be Broughton’s uncle. Although Jewsbury convinced Bentley that this novel was unsuitable for “decent people”, she succeeded only in delaying its publication, as Broughton instead struck a deal with their rival, Tinsley Brothers. While Broughton ultimately triumphed, she was obliged to make extensive revisions, promising to “expunge it of coarseness and slanginess, & to rewrite those passages which cannot be toned down”.

Jewsbury’s moral squeamishness was not shared by the reading public, who were thrilled by Broughton’s vivid depiction of Kate Chester teetering on the brink of an adulterous liaison with the solipsistic and haughty Dare Stamer. Notwithstanding the extensive editorial changes, Broughton’s novel remains a pioneering portrayal of female sexuality, or what Jewsbury called “highly coloured & hot blooded passion”.

Reproducing the text of its first appearance in volume form, this new edition of Not Wisely, but Too Well illuminates the novel’s ideological and aesthetic complexity through appendices related to its publication history, revision, and reception. These appendices include a section containing Jewsbury’s reader’s report and Broughton and Le Fanu’s correspondence with the Bentleys, a list of variants between serial and volume formats of the novel, and a selection of contemporary reviews. Together these materials provide a fascinating case study of the coming to print, and reception, of a controversial Victorian text, while also attesting to the challenges Broughton faced in representing female desire in her early fiction.

Tamar Heller teaches Victorian literature at the University of Cincinnati, with an emphasis on gender issues and on the genres of Gothic and sensation fiction. The author of Dead Secrets: Wilkie Collins and the Female Gothic (1992), she has co-edited two essay collections: Approaches to Teaching Gothic Fiction: The British and American Traditions (MLA, 2003) and Scenes of the Apple: Food and the Female Body in Nineteenth- and Twentieth-Century Women’s Writing (SUNY, 2003). The editor of Rhoda Broughton’s 1867 sensation novel Cometh Up as a Flower for Pickering and Chatto’s Varieties of Women’s Sensation Fiction series (2004), she is currently working on a book-length study of Broughton’s fiction entitled A Plot of Her Own: Rhoda Broughton and English Fiction.