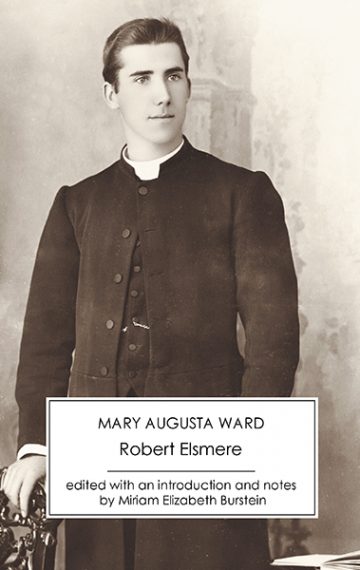 edited with an introduction and notes by Miriam Elizabeth Burstein

First published in 1888, Robert Elsmere was probably the biggest-selling novel of the nineteenth century. Inspired by the religious crises of her father, Ward tells the story of an Oxford clergyman who begins to doubt the doctrines of the Anglican church after he encounters the work of German rationalists. Rather than becoming an atheist, Elsmere pursues the idea of “constructive liberalism,” stressing the importance of social work among the poor and uneducated. The Times called it “a clever attack upon revealed religion”, and William Gladstone’s copy was annotated with objections to Ward’s heterodoxy.

In the Victorian age, nothing was more likely to generate publicity than religious controversy, and Robert Elsmere became a runaway success.  More than one million copies were sold, generating around £4,000 in royalties, which would today put Ward in the millionaire author bracket. Her earnings would have been higher if it weren’t for the absence of international copyright laws when Robert Elsmere was first published.  Many cheap US editions were hurriedly produced to cash in on its success.  Some were sold as loss leaders for just 4 cents, and other copies were given away free with every cake of Maine’s Balsam Fir Soap, conveying the idea that cleanliness was next to godliness.

Out of print for twenty five years, this new edition brings Ward’s publishing phenomenon to a new audience. The text is completely reset, and the edition includes:

Miriam Elizabeth Burstein is Professor of English at the State University of New York, College at Brockport, specializing in nineteenth-century literature. She is the author of Narrating Women’s History in Britain, 1770-1902 (2004) and Victorian Reformations: Historical Fiction and Religious Controversy, 1820-1900 (Notre Dame, 2013).

Read Walter Pater’s review of Robert Elsmere from the Manchester Guardian in 1888.