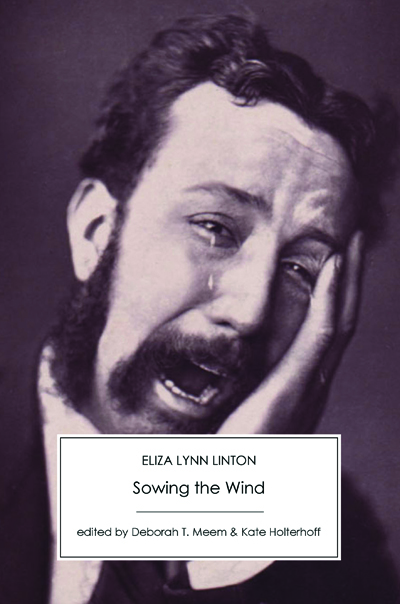 “certainly worth the attention of anybody interested in the practical & psychological problems of Victorian women workers” Charlotte Mitchell, Times Literary Supplement

St John Aylott’s life is in turmoil. With his social status already under threat, even his virtuous wife Isola is questioning his authority. Influenced by her tomboyish cousin, journalist Jane Osborn, who provides female solidarity and strong opinions, Isola fights to assert her subjectivity over a tyrannical husband; meanwhile Jane is forced to adjust to the masculine world of work on a daily newspaper.

Sowing the Wind was Eliza Lynn Linton’s first critically successful novel. Written during the breakdown of her marriage, it is openly, and often painfully, autobiographical. With its themes of inheritance, concealed identity, madness, and domestic violence, Linton’s novel epitomises the sensation genre.

The Athenaeum reviewer concluded: “The primary idea of the book is ingenious, and it is consistently kept in view throughout the narrative. We recommend readers in search of an uncommon novel to send for Sowing the Wind.” The Saturday Review was terrified by the “dark hints of what would happen if women, instead of men, had the making of the laws”.

This edition includes a critical introduction by Deborah T. Meem and Kate Holterhoff, explanatory footnotes, a selection of contemporary reviews, and an extract from The Life of Mrs Lynn Linton.