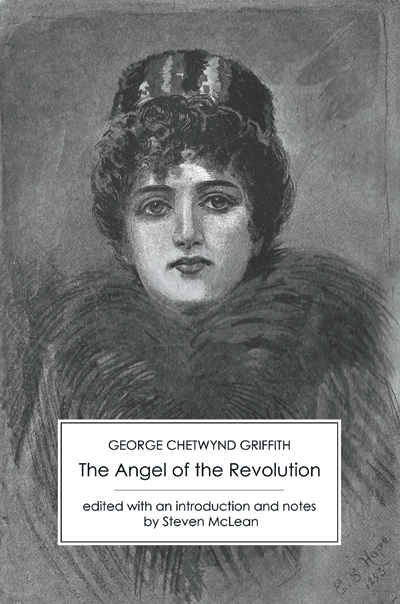 edited with an introduction and notes by Steven McLean

First published in 1893, The Angel of the Revolution is a fantastical tale of air warfare in which an intrepid group of Socialists, Anarchists and Nihilists defeat Capitalism with their superior knowledge of dirigibles. Led by a crippled, brilliant Russian Jew and his daughter, Natasha, The Brotherhood of Freedom establishes a ‘pax aeronautica’ over the world, thanks to the expertise of Richard Arnold, a young scientist. Arnold falls in love with Natasha (the eponymous Angel), and Griffith builds a utopian vision of Socialism and romance.

As well as writing a cracking good story, Griffith is also remarkably prescient in predicting future technology, including air travel, tidal power, and solar energy. He also engages with timeless debates over social responsibility. Griffith imagines a world in which the wealth of the obscenely rich is sequestered, their property seized for the public good, and their businesses nationalised. Those with unearned incomes are forced to either pay punitive tax, or to undertake equivalent labour in the community. Griffith’s message lacks subtlety, but it couldn’t be more pertinent in the twenty-first century.

This new edition includes a critical introduction by Steven McLean, and also:

Steven McLean’s research focuses on the interconnections between literature and science in nineteenth-century literature. He is the author of The Early Fiction of H. G. Wells: Fantasies of Science (2009) and the editor of H. G. Wells: Interdisciplinary Essays. More recently, he has written on Emile Zola. Steven has taught at a range of academic institutions.

The Angel of the Revolution

“I’ve read this described elsewhere as a “steampunk” novel and I can see why. It was published in 1893 and set in the near future of 1903 with imaginary alternative technology – one of the predecessor s of H.G Wells. It’s a great read, and this edition has the enormous advantage of a helpful intro by Steven Mclean on the obscure author, notes to the text and a host of fascinating appendices.” Amazon reviewer