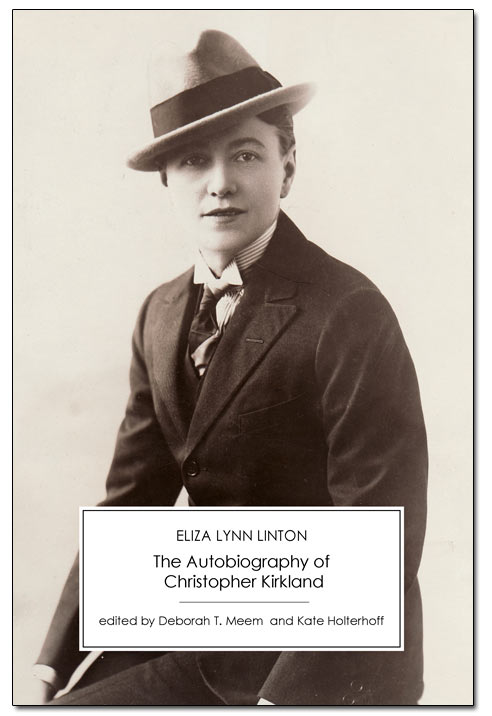 Friends of Eliza Lynn Linton were appalled at how much personal information she divulged in The Autobiography of Christopher Kirkland (1885). In this astonishing work of literary transvestism, Linton adopts a male persona in order to recount her loss of faith at an early age, her sexual relationships with other women, and her disastrous marriage to the engraver William Linton. She told her publisher, George Bentley: “I have put my very Soul, my life into these pages.” In later life, she said it as “an outpour no one hears me make by word of mouth, a confession of sorrow, suffering, trial, and determination not to be beaten, which few suspect is the underlying truth of my life.”

Linton’s biographer, George Layard, described it as an “unfortunate moment” when Linton “conceived the idea of reversing her own sex and that of many of her characters”, although admits “when she was born, a boy was due in the family, and it was only the top-coating that miscarried.”  Mrs Campbell Praed also described Linton as a “curious mixture … of the man and the woman”. By recreating herself as a tall, handsome man, Linton was able to articulate passionate feelings for women without risking exposure as an “invert”.

To the modern reader, with a more enlightened view of gender and sexuality, The Autobiography of Christopher Kirkland in an intriguing autobiography-in-drag. It gives a fascinating insight into the mind of a nineteenth-century lesbian, whose only means of self-expression was male identification. As Deborah Meem and Kate Holterhoff write in their thoughtful introduction: “What she could not openly state or plainly symbolize she told slant, tantalizing readers with her willingness to walk the fine line between propriety and impropriety, convention and bohemianism. In so concealing her own deepest doubts and transgressions, she allows us to see the energetic, striving chiaroscuro of optimism and gloom that made her what she was. Hoist on the petard of contradictory Victorian messages about women, she lived and wrote about these contradictions–a “woman against women” attempting to reconcile her desire for independence with the narrow strictures of her conflicted age.”

This new edition is completely reset and includes:

Deborah Meem specializes in Victorian literature and LGBT studies. Her work has appeared in Journal of the History of Sexuality, Feminist Teacher, Studies in Popular Culture and elsewhere. Her edition of Eliza Lynn Linton’s 1880 novel The Rebel of the Family was published in 2002 (Broadview).  She co-edited Femme/Butch (2002) and Lesbian Academic Couples (2005), both published by Haworth Press. Her co-authored book Finding Out: an Introduction to LGBT Studies appeared in 2009 (Sage), and in 2010 she edited Linton’s 1851 Realities (Valancourt). Deb is currently Head of the Women’s, Gender, and Sexuality Studies Department at the University of Cincinnati.

Kate Holterhoff is a PhD student in Carnegie Mellon University’s Literary and Cultural Studies program focusing primarily on science and aesthetics in fin-de-siècle Victorian literature. She published the essay “Beauty As a Terministic Screen In Charles Darwin’s The Descent of Man” (2010) in Victorian Network, a peer-reviewed journal out of King’s College in London. She also published “Liminality and Power in Bram Stoker’s Jewel of Seven Stars” in the anthology Critical Essays on Victorian Gothic and Sensation Fiction from Wollstonecraft to Stoker (2009) published by McFarland.