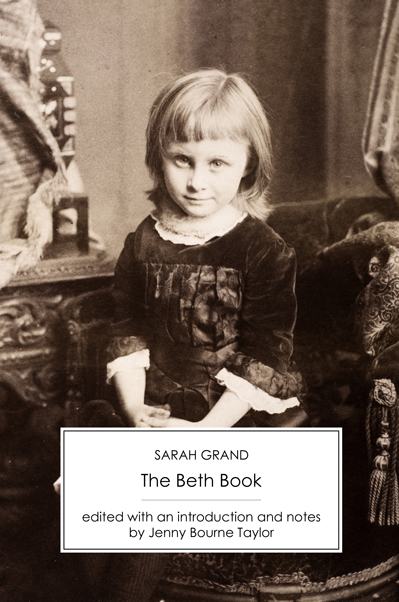 edited with an introduction and notes by Jenny Bourne Taylor

First published in 1897, The Beth Book – Being a Study from the Life of Elizabeth Caldwell Maclure, a Woman of Genius is a semi-autobiographical novel offering a portrait of the artist as a young woman. Grand’s compelling story recounts in vivid detail the childhood of her young heroine, Beth, a spirited and intelligent girl who challenges the limitations of provincial life in Ireland and Yorkshire. Without the benefit of formal education, Beth must make her own way through adolescence, contending with a violent mother and an alcoholic father. With little money to go round, Beth often goes without so that her brothers might be raised as gentlemen, thus giving her an early introduction to sexual inequality. Even in girlhood, Beth challenges gender expectations, dressing as a boy and poaching rabbits for the family dinner table.

Like Grand herself, Beth makes an early marriage to escape her unhappy childhood, becoming the wife of philandering doctor, Daniel Maclure. Disillusion soon turns to defiance, as Beth recreates herself as a woman of genius, with her rousing refrain of “I shall succeed!” After escaping to a room of her own, Beth becomes a New Woman, setting a high standard both for herself and for other women.

Grand’s extraordinary recall of childhood emotions, avoiding Victorian sentimentality, makes The Beth Book a convincing and captivating chronicle of female adolescence. The coming of age and sexual awakening of Beth broadens into a consideration of wider social issues, such as marital violence, vivisection, and the sexual double standard. The Beth Book deserves to be seen as a classic of the Victorian age.

This new edition, the first for almost twenty years, includes:

Jenny Bourne Taylor is Professor of English at the University of Sussex. She has published widely on nineteenth-century psychology and literature, including  In the Secret Theatre of Home:  Wilkie Collins, Sensation Narrative and Nineteenth-Century Psychology, and is the co-editor, with Sally Shuttleworth, of Embodied Selves: An Anthology of Psychological Texts. Other publications include The Cambridge Companion to Wilkie Collins, George Gissing: Voices of the Unclassed (co-edited with Martin Ryle), and The Oxford History of the Novel in English, vol 3 1820-1880 (co-edited with John Kucich).

Appendix A – Contemporary reviews of The Beth Book

Appendix B – Articles by and responding to Sarah Grand