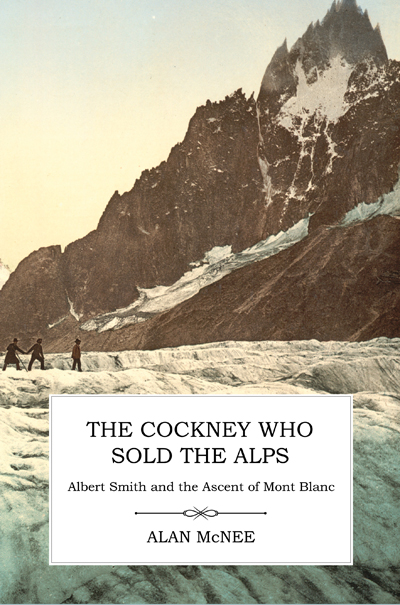 Albert Smith is one of the most famous Victorians of whom you’ve probably never heard. During his lifetime, he was a household name, thrilling audiences with his Ascent of Mont Blanc show at London’s Egyptian Hall. An inveterate showman, Smith was also a doctor, journalist, raconteur, novelist, travel writer, and playwright. His many talents were outstripped only by his boundless self-belief and huge personality. Even Queen Victoria described him in her journal as “inimitable”, an epithet Smith’s contemporary Charles Dickens liked to reserve for himself.

Although Smith died aged only 43, he managed to pack much incident into his short life. He was robbed by highwaymen in Italy, narrowly escaped death in a hot air ballooning accident, and dodged arrest in Paris during the June Days Uprising of 1848. He also got caught up in the row over Dickens’s affair with Ellen Ternan.

While his bumptiousness made Smith a divisive figure, many saw in him the Victorian ideal of the self-made man: energetic, imaginative, and ready to seize any new opportunity. As Alan McNee explains in this lively biography, it was his intrepid ascent of Mont Blanc in 1851 that propelled Smith to stardom. His subsequent show inspired ‘Mont Blanc mania’, encouraging participation in mountaineering as a popular pursuit.

The Cockney Who Sold the Alps is a story of ambition, spectacle, and the fleeting nature of celebrity.

Alan McNee is a former journalist. He has a Master’s degree in Victorian Studies and a PhD from Birkbeck, University of London. The Cockney Who Sold the Alps is his first book. He lives in London.

“Very well written and meticulously researched, this book should appeal to anyone with an interest in the Victorian era and beyond.” Amazon reviewer

“A fascinating and beautifully written book. Albert Smith is long forgotten but he was one of the most famous showmen of the nineteenth century. The author brings Smith vividly to life and in the process gives us a detailed and lively portrait of Victorian England. I thoroughly enjoyed reading this book.” Amazon reviewer

“Although immaculately researched, McNee’s scholarship is worn lightly, and the book will appeal to both the specialist in nineteenth-century literature and culture and the general reader. Smith’s story would be enjoyable even from a less-accomplished writer than McNee. But the relentless unfolding of drama after drama in Smith’s life is matched by the paciness of McNee’s narrative. A really enjoyable read! Smith’s life deserves to be more widely known, and McNee has delivered.” Amazon reviewer