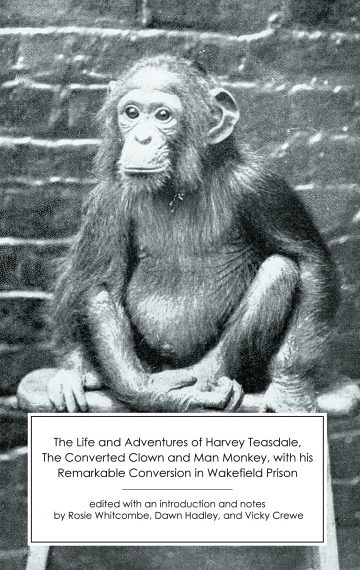 The spirited memoir of Harvey Teasdale (1817-1904) tells the story of a wilful child who became a stage-struck youth before achieving success with his celebrated acrobatic performances in a monkey costume in the theatres of Yorkshire.  Imprisoned for assaulting his wife, he experienced a religious conversion and travelled around Yorkshire as an itinerant preacher, using his actor’s skills to promote Methodism as vigorously as he once promoted himself.  Teasdale’s highly expressive and dramatic autobiography is a rare example of the voice of a working-class Victorian performer; it also gives fascinating glimpses of life in nineteenth-century Sheffield and its schools, factories, theatres and public houses.

Rosie Whitcombe is coming to the end of her second year of PhD study at Birmingham City University. She completed her undergraduate degree in English Literature in 2015, and her masters in Nineteenth Century Studies in 2016, both at the University of Sheffield. Rosie’s current research focuses on the letters of Romantic poet John Keats. Her thesis will provide a new historical and critical account of letter writing with a focus on self-fashioning, theories of the epistolary and the text as artefact.

Dawn Hadley is Professor of Medieval Archaeology at the University of York, and was formerly a professor in the Department of Archaeology at the University of Sheffield. Her research interests are principally the Viking Age, medieval gender, childhood and funerary practices, and she has published many books and articles on these topics. However, she has also developed research interests in the nineteenth century in recent years, especially working-class culture.

Vicky Crewe is a historical archaeologist whose most recent research explores the post-medieval world, particularly material culture, domestic life, popular culture, empire and childhood in the nineteenth century. Vicky has held research, teaching and public engagement roles at the University of Sheffield and Cardiff University, and currently works in learning and teaching development at the University of Sheffield.

“This new edition of The Life and Adventures of Harvey Teasdale is a significant contribution to the ongoing work of increasing access to working-class life-writing. It is usefully and sensitively edited, tracing webs of reference and allusion, locating the narrative in Sheffield’s Victorian theatre history, and holding the author to account for his lies and brutality.” Life Writing