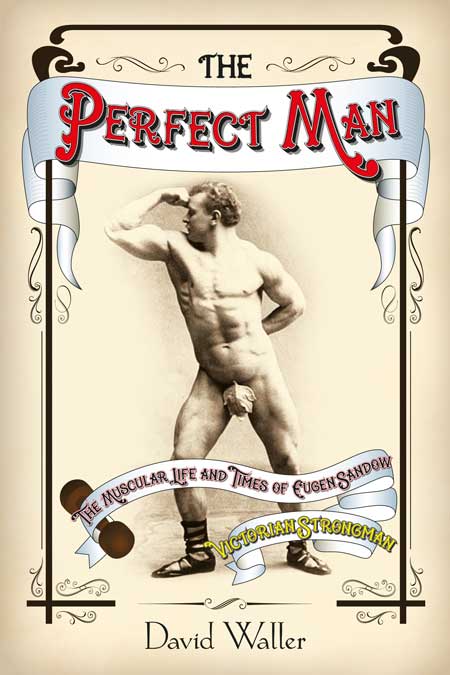 Eugen Sandow (1867-1925) was a Victorian strongman who was colossally famous in his day and possessed what was deemed to be the most perfect male body. He rose from obscurity in Prussia to become a music-hall sensation in late Victorian London, going on to great success as a performer in North America and throughout the British Empire. He was a friend to King Edward VII and was appointed Professor of Physical Culture to King George V. His physical culture system was adopted by hundreds of thousands around the world. Sandow lost his fortune at the time of the First World War and he ended up being buried in an unmarked grave in Putney Vale Cemetery.

There is lively interest in him on the web where his dumbells or chest-extenders sell for hundreds of pounds, and an autographed photograph for thousands. Written with humour and insight into the popular culture of late Victorian England, David Waller’s book argues that Sandow deserves to be resurrected as a significant cultural figure whose life, like that of Oscar Wilde, tells us a great deal about sexuality and celebrity at the fin de siècle.

David Waller was educated at Manchester Grammar School, Balliol College, Oxford, and Birkbeck College, London. He worked for the best part of ten years as a journalist on the Financial Times. He has written two business books but more recently turned to historical biography after the chance find of a treasure-trove of papers in a home counties attic. The Magnificent Mrs Tennant, a biography of the Victorian grande dame Gertrude Tennant, was published in summer 2009 by Yale University Press. Reviews have been flattering: the book was compared to “Thackeray at his best” (Independent) and Valerie Grove in The Times wrote: “Waller’s story has terrific pace and wit. It is rich in period detail and places events unobtrusively in context. It is a real discovery.”

“Eugen Sandow is a fascinating biography of a Victorian enigma: a man who vigorously transgressed the social taboos of his era, and achieved fame and wealth for doing so. David Waller tells Sandow’s story with wit, insight and a sure hand.” – Amanda Foreman, author of Georgiana Duchess of Devonshire and A World on Fire

“A fascinating and exotic tale, cleverly told, of the rise of a man from illegitimacy and obscurity to music-hall success and pioneering body-building” – Rosemary Ashton

“The Perfect Man now has the perfect biographer. Like its subject, David Waller’s book is well-balanced and a thing of beauty that bulges in all the right places” – Rose Collis, author of Colonel Barker’s Monstrous Regiment

“And what is by my side of the bed? David Waller’s biography of the hugely famous Victorian strongman Eugen Sandow – it’s a fascinating look at celebrity culture of the period. No mention is made of what he bought his wife for Christmas, which is a shame. Because the title of the book is The Perfect Man.” – Mrs Moneypenny – The Financial Times

“Waller’s engaging book reads like a Victorian novel … [he] has discovered a number of new facts about Sandow’s life, and his analysis of his cultural significance within the Victorian literary scene is especially useful…”  – Dominic G. Morais – Journal of Sport History

BBC – Eugen Sandow: The Man with the Perfect Body

The Daily Mail – The man whose muscles made women faint

The Dispatch – The First Great Muscleman

The Art of Manliness podcast