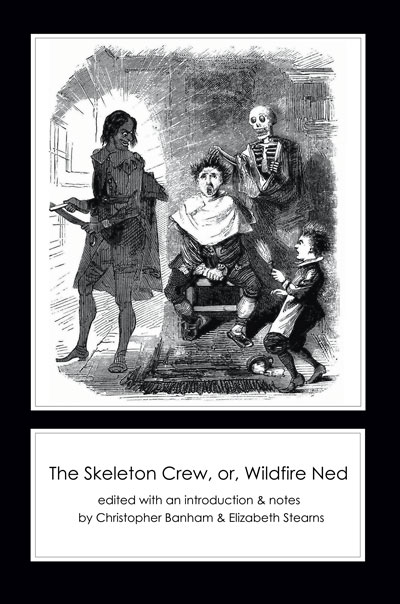 edited with an introduction and notes by Christopher Banham & Elizabeth Stearns

First serialised between 1866 and 1867 by the Newsagents’ Publishing Company and Edwin J. Brett, The Skeleton Crew, or, Wildfire Ned was among the finest and most popular of the fierce ‘penny dreadful’ tales which flourished in the mid nineteenth century. Edward Warbeck, the eponymous Ned, pursues a quest to defeat murderous bandits known as the Skeleton Crew, led by the indefatigable Death-wing.

Occultist A. E. Waite described this bloodthirsty tale as “suggestive of a film produced by the inmates of Bedlam” with a storyline “in a state of nightmare”. The original vivid, and often terrifying, images of the skeleton outlaws are reproduced in this edition.

Christopher Banham is a historian and teacher based in Leeds, UK. His published works span the subjects of Victorian history, literature, culture and society. He has a particular interest in the Victorian boys’ periodical publishing industry. His 2006 PhD, Boys of England and Edwin J. Brett, 1866-99, and subsequent articles developed from it, reappraised Brett’s flagship periodical, often cast as mere ephemera or unthinkingly hegemonic, as an important,
indigenous component of working class society and culture in mid to late Victorian Britain.

Elizabeth Stearns is a US-based independent scholar interested primarily in texts written for lower-class Victorian audiences. Her PhD and published work examine representations of criminality in penny bloods serialized between 1830 and 1850. She teaches literature, composition, and humanities courses at community colleges and universities, most recently in the Denver area.