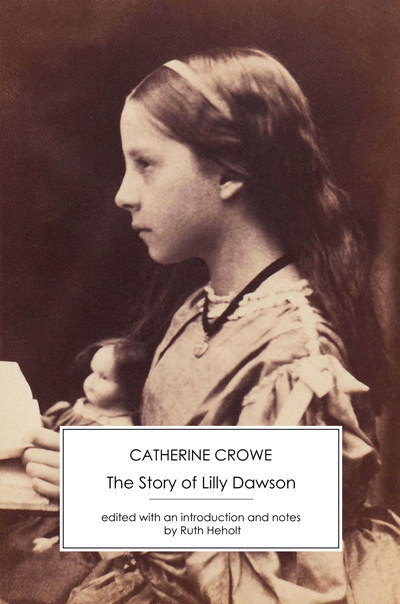 edited with an introduction and notes by Ruth Heholt

Shipwrecked as a young girl, middle-class Lilly Dawson is kidnapped by smugglers and forced to work as their servant. Terrified by the prospect of a forced marriage, this Victorian Cinderella flees captivity and has to navigate an outside world she finds both oppressive and dangerous. The Story of Lilly Dawson is a romping tale of pirates, outlaws, murder, mistaken identity, lust and betrayal.

Best known for The Night Side of Nature, Crowe was one of the most successful women novelists of the mid-nineteenth century. Through her memorable heroine, Crowe insists that woman can “play a noble part in the world’s history, if man would . . . not treat her like a full-grown baby to be flattered and spoilt on the one hand, and coerced and restricted on the other, vibrating between royal rule and slavish serfdom”.

As Ruth Heholt argues in her introduction, The Story of Lilly Dawson places Crowe in the vanguard of the emerging sensation genre and shows her to be a visionary and radical thinker and writer.

The London Messenger called it  “a novel of rare merit”, while The Literary Gazette praised Crowe’s realism:

“[Crowe’s] chief merit will […] be found in the exact descriptions of manners and feelings of the vile and lowly personages with whom she has peopled her page. Her ostlers, washerwomen, servants, beggars, villains, &c. &c., have all the semblance of realities; and we are surprised how any female in the better walks of life could learn to represent them in so vivid and apparently accurate a style.”

Ruth Heholt is senior lecturer in English at Falmouth University. She specialises in the supernatural and the Gothic. She is editor of the e-journal Revenant: Critical and Creative Studies of the Supernatural and has published articles and chapters on various aspects of the supernatural. She is editor of a special edition of Victoriographies entitled ‘Haunted Men’ (2014). She is currently working on an edited collection, Regional Gothic with William Hughes and a special issue of Contemporary Women Writers with Fiona Peters and Gina Wisker on Ruth Rendell.