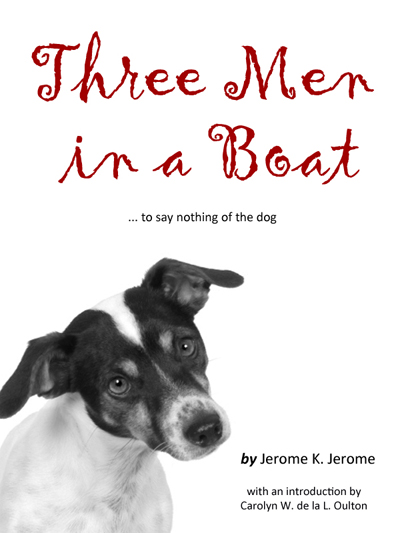 Jerome K. Jerome’s comic masterpiece is based on the adventures of J, Harris and George, who decide a boating holiday would be just the thing to help them recover from overwork. Their famous journey up the Thames, from Kingston-upon-Thames to Oxford is thwarted variously by incompetence, recalcitrant tins of pineapple, and an irascible fox terrier called Montmorency.

Three Men in a Boat became an instant bestseller, and remains one of the most popular books in the English language.

This edition includes a new introduction by Carolyn W. de la L. Oulton, author of Below the Fairy City: A Life of Jerome K. Jerome.

QUOTES FROM THREE MEN IN A BOAT

“Let your boat of life be light, packed with only what you need – a homely home and simple pleasures, one or two friends, worth the name, someone to love and someone to love you, a cat, a dog, and a pipe or two, enough to eat and enough to wear, and a little more than enough to drink; for thirst is a dangerous thing. ”

“I can’t sit still and see another man slaving and working. I want to get up and superintend, and walk round with my hands in my pockets, and tell him what to do. It is my energetic nature. I can’t help it.”

“Everything has its drawbacks, as the man said when his mother-in-law died, and they came down upon him for the funeral expenses.”

“I like work; it fascinates me. I can sit and look at it for hours.”

“How good one feels when one is full — how satisfied with ourselves and with the world! People who have tried it, tell me that a clear conscience makes you very happy and contented; but a full stomach does the business quite as well, and is cheaper, and more easily obtained.”