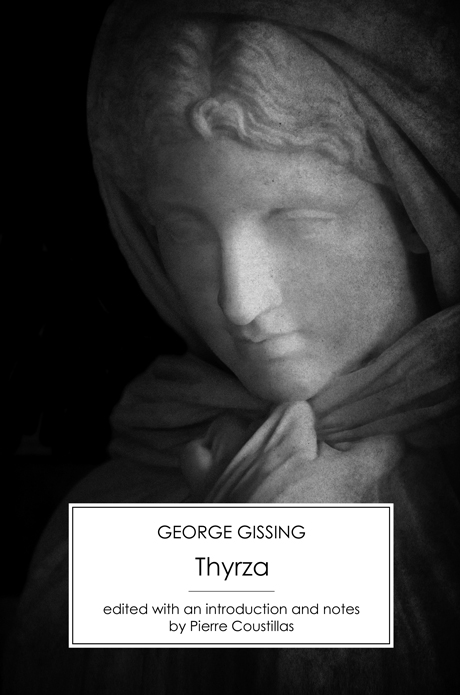 edited with an introduction and notes by Pierre Coustillas

First published in 1887, Gissing intended Thyrza to “contain the very spirit of London working-class life”.  His story tells of Walter Egremont, an Oxford-trained idealist who gives lectures on literature to workers, some of them from his father’s Lambeth factory. Thyrza Trent, a young hat-trimmer, meets and falls in love with him, forsaking Gilbert Grail, an intelligent working man who Egremont has put in charge of his library.

In a tale of ambition, betrayal, and disillusionment, Gissing’s heroine aspires to purity and self-improvement. Trapped by birth and circumstance, she is unable to escape her destiny. Thyrza Trent is the embodiment of Gissing’s preoccupation with sex, class, and money, and through her, he exposes a society intrinsically opposed to social mobility.

In a letter, Gissing wrote, “Thyrza herself is one of the most beautiful dreams I ever had or shall have. I value the book really more than anything I have yet done.” Contemporary critics praised Gissing’s “profound…knowledge of the London poor” and his “courageous presentation of truth”. His unforgettable portrayal of urban poverty describes the “meanness and inveterate grime” of the Caledonian Road and a Lambeth “redolent with oleaginous matter”.

Thyrza is a powerful, shocking and unforgettable novel.

This new scholarly edition, the first for over twenty-five years, includes:

“As does its companions, the Victorian Secrets edition of “Thyrza” is beautifully produced with a readable, reliable version of the text. Pierre Coustillas, the distinguished Gissing scholar and the author of a recent three-volume biography, edited the volume, as well as the earlier two volumes, prepared the endnotes, and wrote an insightful introduction to the book. The introduction includes as well a short biography of Gissing and a bibliography of studies of “Thyrza”. The edition includes as well an essay by David Grills, Kellogg College, Oxford, discussing the changes Gissing made in the book between the first version in 1887 and the revised version of 1891. Finally, the book includes maps of the two “worlds” inhabited by the primary characters of the book, Thyrza Trent and Walter Egremont.” Amazon reviewer