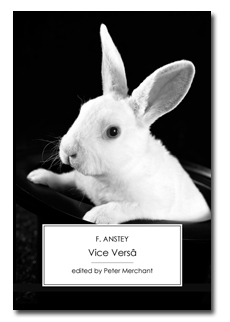 edited with an introduction and notes by Peter Merchant

First published in 1882, Vice Versâ shows the disastrous consequences of having one’s wishes granted.  After delivering a pompous lecture to his son Dick, stuffy Paul Bultitude declares his wish to be a schoolboy once more so he can enjoy the carefree existence of youth.  Unfortunately for him, he happens to be clutching the mysterious and magical Garudâ stone, and suddenly finds himself transformed into the diminutive body of his son.  Dick quickly uses the stone to his own advantage, assuming his father’s portly character and swapping roles.  While Dick gets the opportunity to run his father’s business in the City and wreak havoc on the household, Paul must endure the privations of the brutal boarding school he forced young Dick to attend.  Determined not to lose his dignity, Paul retains his former bombastic demeanour, leading to a series of hilarious episodes with the cane-wielding Dr Grimstone.

F. Anstey began writing Vice Versâ at Cambridge under the working title of ‘Turned Tables’, and scored an overnight success when it was published, its comic delights reportedly causing Anthony Trollope’s fatal stroke.  The novel has been enjoyed in many forms by subsequent generations, with film adaptations appearing in 1916, 1937, 1948 and 1988.  Vice Versâ also inspired Mary Rodgers’ Freaky Friday (1972).

Peter Merchant gained his doctorate at Cambridge University and has worked since 1983 at Canterbury Christ Church University, UK, where he is Subject Leader for English. A Victorian specialist, he is the editor of three Wordsworth Classics (A Tale of Two Cities, The Tenant of Wildfell Hall, and The Way We Live Now) and has contributed essays to journals including The Dickensian, Dickens Quarterly, Victorian Poetry, Eighteenth-Century Fiction, and Recusant History. He also recently contributed, both as essayist and (with Suzanne Bray and Adrienne E. Gavin) as co-editor, to the volume Re-Embroidering the Robe: Faith, Myth and Literary Creation since 1850 (Cambridge Scholars, 2008).