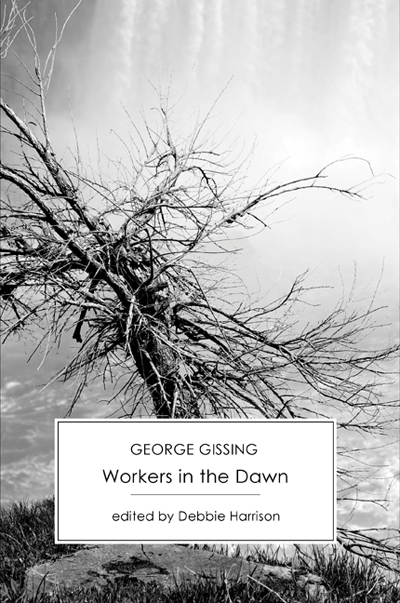 edited with an introduction and notes by Debbie Harrison

When he is eight years old Arthur Golding watches his gifted but dissolute father die in poverty and squalor. Aided by a series of brilliantly-drawn characters, Arthur escapes slum life, gains an education, falls in love, and looks set to launch his career in London as an artist. But when he meets a beautiful young prostitute he embarks on a liaison that plunges him into a dark world of passion, threatening to destroy everything he has worked for and holds dear.

In this powerful and largely autobiographical first novel, George Gissing establishes the hallmarks of his life-long literary obsession with class, money and sex. Against the turbulent background of London in the late nineteenth century, Gissing explores the daunting challenges that face men of education, intelligence and talent, who strive to escape from the lower working class into which they are born.

The text is that of the first edition published by Remington & Co in 1880, and also includes:

Debbie Harrison is an Honorary Research Fellow at Birkbeck College, University of London, where she is currently working on her monograph, A Victorian Hangover: Narratives of Addiction 1830-1900. Her research focuses on the interface between literature, medicine and social science in the nineteenth century.

“It’s a real pleasure to see a professional new edition of one of Gissing’s early novels – hopefully the first of many. The critical material is excellent. I particularly liked the map, the penetrating introduction and the extensive notes to the text, all of which add further layers to the story.” Amazon reviewer

“[this] volume is beautifully presented, with a useful map of the area of that area of London where the action occurs. I look forward with anticipation to future publications from the same source.” Amazon reviewer

“Besides the prefaces and notes, this book includes a useful chronology of Gissing’s life. The book also includes a map called ‘Arthur Golding’s London’ which shows the reader the places Gissing mentions in his story. Many of the landmarks of the London poor quarters were demolished after Gissing wrote. The map is a valuable addition to a volume I will treasure.” Amazon reviewer