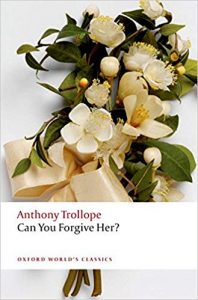 Stephen King once rudely referred to the first Palliser novel as Can You Finish It? It’s certainly true that Trollope wasn’t known for his brevity, and this handsome new OUP edition of Can You Forgive Her? is 700 pages long. However, Trollope grapples with an ambitious range of political and social themes and, in so doing, presents a compelling and provocative narrative.

The central question raised is ‘What should a woman do with her life?’ and it is examined through expertly-drawn characters who all make very different choices. Alice Vavasor is a young woman with an independent fortune who has ended up engaged to a stuffed shirt by the name of John Grey. Although eminently respectable, Grey (as his name suggests) is interested mainly in propriety and is ill-suited to a wife who seems likely to prove a handful. Alice’s cousin and quondam lover George predicts: “He’d make an upper servant of her; very respectable, no doubt, but still only an upper servant.”

George Vavasor is the antithesis of John Grey: he lives for excitement, caring little for respectability. His financial speculations go disastrously wrong, he is disinherited by his grandfather, and he even assaults his loyal sister, Kate. George’s reckless behaviour prompted Alice to break their earlier engagement, but Kate is now determined that they should be reunited. Her motive is two-pronged: George needs Alice’s money in order to fulfil his parliamentary aspirations, and Kate wants a closer union with Alice.

As Dinah Birch discusses in her excellent introduction to this edition, Trollope hints at the idea of female marriage, with Kate effectively pursuing the courtship of Alice on her brother’s behalf. “Oh, heavens! how I envy him!”, she says when she imagines George caressing Alice. This unusual triangulation leads to a more equal marriage, with George referring to Alice as his “partner” and “a dear friend bearing the same name”. In marrying George, Alice is not obliged to change her name, thereby retaining her own identity, which otherwise would have been subsumed into that of her husband.

The plot concerning Alice has become rather overshadowed by the introduction elsewhere of two of Trollope’s most famous characters: Plantagenet and Glencora Palliser. We see Glencora as a wealthy young heiress, stultified by her arranged marriage with an austere and serious-minded husband. She is distracted by the dubious charms of the ne’er do well Burgo Fitzgerald and comes within a gnat’s whisker of breaking her wedding vows. The prospect of losing his wife to a bad ‘un rouses Palliser from his stupor and the planned elopement is foiled in a dramatic ballroom scene. Glencora “had been counselled that it was not fitting for her to love as she had thought to love, and she had resolved to give up her dream.” Essentially, she receives an early lesson in the sexual double standard. Whereas George Vavasor is able to maintain a mistress and visit prostitutes, a young woman must accept that her life is circumscribed.

Trollope’s answer to the question “what should a woman do with her life?” is “marry and have children”. There’s no other option, so they should simply stop mithering and get on with it. As Dinah Birch writes in the introduction, “In Trollope’s view, Alice’s suffering is rooted in her persistent indecision, not in the limited choices available to her.” Although she strives to resist her fate, Trollope is careful not to make her one of those pesky feminists: she was “not so far advanced as to think that women should be lawyers and doctors.” As such, her struggle is futile, as she gives no serious consideration to anything other than the status quo.

Although Trollope’s conclusion is, as ever, morally conservative, he does allow his heroines some feelings along the way. Female chastity is shown to be a matter of resistance, rather than an innate quality. He also shows through George the disastrous consequences of men being given too much liberty. His handling of relationship dynamics is incredible and his portrayal of Lady Glencora and Plantagenet Palliser’s marriage is genuinely moving, setting a keynote for the rest of the series of novels.

Yes, it’s a long book, but one in which the reader can become utterly absorbed, luxuriating in Trollope’s exquisitely-imagined world.