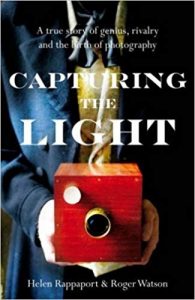 Anyone who has developed their own photographs will recall that miraculous moment as the image slowly materialises before your very eyes. The story behind the discovery of this alchemical technique is no less exciting.

As with most good stories, there is a rivalry at its heart, albeit an unintentional one. During the 1830s two men on opposite sides of the Channel threw their considerable talents into one quest: to permanently capture a camera image on paper. Their characters couldn’t have been more different. Louis Daguerre was a flamboyant artist of humble parentage and limited education; Henry Fox Talbot had been born into the English landed gentry and went on to graduate from Cambridge. Talbot was the archetypal gentleman scientist, funding his hobby with a generous trust fund; Daguerre, meanwhile, was obliged to earn while he learned, becoming an extraordinarily accomplished painter of stage effects. Notwithstanding their differences, both men managed to simultaneously develop their own process for ‘capturing the light’.

In Capturing the Light, Helen Rappaport and Roger Watson unravel the drama surrounding these pioneering men in alternate chapters, conveying the complexity of scientific ideas through clear and engaging prose. Those on Talbot reflect the orderliness of a man who blessed future biographers with 10,000 letters and 300 notebooks. While his life is meticulously documented, Daguerre’s is obfuscated by a web of apocryphal stories and the cultivation of a personal mythology.

Contrasted with the mercurial Daguerre, Talbot comes across as rather ponderous, and it comes as no surprise when the enterprising Frenchman grabs all the glory with his daguerreotype. Although Talbot had by then perfected his own calotype process, it was Daguerre’s invention that was announced to the world in January 1839. His notebooks show that the original idea had popped into Talbot’s head while on honeymoon at Lake Como in 1833, yet he didn’t stir himself to publish any papers. Thanks to this dithering, Talbot earned the ridicule of his peers and even to this day has never received the credit he deserves. Possibly far worse was the disappointment of his mother, Lady Elisabeth, who devoted her remaining years to chivying him into action, outraged that her clever son has proved so inept at self-promotion.

While Talbot kicked himself, the scientific community seized on these new discoveries, quickly refining them into the processes we recognise today. The press were divided, with one newspaper dismissing photography as “drawing by sunshine”, and another exhorting its readers to tie photogenic paper to the tail of a kite so “when it comes down you will have a view of the earth upon it” (an early form of Google Streetview, perhaps?) Others were quick to spot more covert applications. In 1839 the Morning Post reported on a jealous French husband obtaining photographic evidence of his wife’s infidelity and successfully presenting it in court. By the end of the century, the same newspaper was marveling that the camera had “become as indispensable as the bicycle”. These days photography has become an almost everyday activity, and even an inadvertent one. When clearing personal data from a mobile phone recently, I was astonished to discover over 200 photos of the inside of my handbag.

Capturing the Light reads like a  historical thriller, the well-paced narrative evoking both the exhilaration and frustration experienced by those in the vanguard of scientific discovery.

Victorian Secrets publishes No Place for Ladies: The Untold Story of Women in the Crimean War by Helen Rappaport