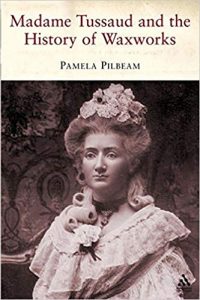 A paradoxical disadvantage of the Kindle’s long battery life is that I often forget to charge it before train journeys and find myself facing a blank screen. The last such episode proved felicitous, as it prompted me to buy Madame Tussaud and the History of Waxworks from the wonderful £2 bookshop opposite the British Library. Although I visited Madame Tussaud’s several times as a tiny geek, I hadn’t given it much thought since, but Pamela Pilbeam’s superb study has awakened my interest. The book is part biography of Tussaud herself, and part cultural history of waxworks.

Modern waxworks originated in the 1770s with two Parisian exhibitions managed by Phillipe Curtius. He trained young Marie Grosholz (later Tussaud), possibly his illegitimate daughter, and she inherited the business after his death. Although she was later to become an astonishingly successful businesswoman, Marie’s early career was spent modelling the victims of the Terror in Revolutionary France. In her memoirs she claimed to have sat with bloody heads on her knees, taking impressions of their (presumably contorted) features. For subjects who had the good fortune to still be intact, Marie covered their faces with a plaster of Paris mask, inserting straws or quills into their nostrils to allow them to breathe. In one case, Marie forgot the straws and nearly ended up with another corpse. Pilbeam observes that waxworks became a way of normalising the violence of the 1790s, as people became accustomed to bloody images. Marie later maintained that the painter David used her wax model of Marat for his famous bath-tub murder scene.

Once the worst of the Terror was over, Marie married François Tussaud, a civil engineer eight years her junior, and soon had three children. Unfortunately, Tussaud seemed mainly interested in spending her money and Marie was obliged to protect her property from him. An invitation to tour Britain provided her with an opportunity to extricate herself from an exploitative marriage.

Marie marketed herself in Britain as someone au fait with senior politicians and French royalty, and this gave her traveling show a cachet denied to fairground exhibits. The British were intrigued by this exotic woman and flocked to see her curious waxworks. As her popularity grew, French marriage law changed and wives lost all control over their property and earnings, with a working woman’s wages paid to her husband. Marie simply refused to send the proceeds of her industry to François, taking advantage of his inertia. She was wise to do so, as he was rapidly demolishing the business she had left behind in Paris.

Marie’s tireless energy and appetite for self-promotion quickly raised her profile to the extent that she was invited to model the royal family in 1808. Her alacrity and attention to detail in chronicling current events ensured returning audiences. Visitors were encouraged to touch the waxworks, giving them the opportunity to feel part of history and an affinity with figures they could never hope to meet in real life. Marie was always perched in a cubicle, taking the money and keeping a careful eye on everything. The exhibition was aimed squarely at the middle and upper classes, the cost and opening hours designed to deter riff-raff.

The tour continued for an exhausting 33 years, initially with a young family in tow. In 1835, at the age of 74, Marie finally found a permanent base for her models: the Baker Street Bazaar in London. She got herself established just in time to design an intricate representation of Queen Victoria’s coronation in 1837, complete with papier maché of the interior of Westminster Abbey. Queen Victoria’s wedding two years later provided another spectacle, with Marie commissioning an exact copy of the silk bridal gown. Tussaud’s ‘Adjoining Room’ was used for rather less celebratory events, and was dubbed the “Chamber of Horrors” by Punch in 1846. Marie would often purchase the entire contents of murder scenes, and some villains due to be executed would donate clothing for their waxy selves. As Judith Flanders has recently shown in The Invention of Murder, there was endless demand for vicarious sensation in an era when homicide was relatively rare.

As famous as her exhibits, Punch declared Marie “one of the national ornaments of the feminine species” and Dickens immortalised her as Mrs Jarley in The Old Curiosity Shop. The Dickensian portrait, although good publicity, wasn’t entirely flattering, and Marie also attracted considerable censure for her lavish displays and glorification of death at a time when Irish peasants were dying in their thousands. Business remained brisk, however, and Marie was in a position to decline a large offer from the fairground entrepreneur Barnum. François also started greedily eyeing the profits, so Marie transferred the business to her sons and out of the grasp of her importunate husband.

Marie died in 1850, in her 90th year and working almost until the end. Such had been her success that it was rumoured she was buried wearing jewels worth £50K. Two robbers broke into her coffin but were foiled when they accidentally pulled a bell rope. Oops. The business that bore her name continued virtually unchanged in the first few decades following her death. 1851, the year of the Great Exhibition, saw nearly 1 million visitors, and Madam Tussaud’s was the most successful tourist destination in the country. In 1883, the exhibition moved to its current home on Marylebone Road, and the building was rumoured to have cost £80,000 (tens of millions in today’s money). Subsequent financial problems meant that the family sold the business for £173,000 in 1889, although many of them remained on the payroll. The basic premise of the show remained intact: recreating current and historical events and appealing to the public’s desire to get up close and personal with famous people without the risk of getting a slap. The Chamber of Horrors remained gruesome, the Tussauds even purchasing the sweet a baby was sucking when it was brutally murdered. Yes, quite. After changing hands, Tussaud’s did start trying to broaden its appeal across class boundaries, including models of political activists and radical politicians. In the new century, they displayed four of the suffragette leaders and placed them facing the Asquith government. Annie Kenney protested that the ministers might melt under their combined glare.

Tussaud’s continues to be both popular and topical, although these days I hardly recognise any of the latest additions. Pilbeam carefully documents the laborious work involved in creating a modern waxwork: two days to make the eyes, with silk threads used for the veins; 35 hours to colour the head (they must have saved considerable time with David Cameron); and 140 hours to construct a head of hair, each hair being sewn in separately. Such a wealth of detail is what makes this book so enjoyable and compelling. Pilbeam has carried out extensive research and presented it in a scholarly, yet accessible, way. I can’t say it has made me want to visit Madame Tussaud’s again, but it has given me an appreciation for the waxworks, and enormous respect for the extraordinary woman who created them.

Madame Tussaud and the History of Waxworks by Pamela Pilbeam