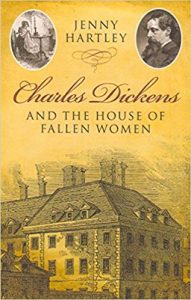 I’m so glad to have come across Jenny Hartley’s book, as it has greatly improved relations between Charles Dickens and me.  We previously had a complicated relationship, as I was unable to forgive him for the appalling way in which he cast aside his wife, Catherine, and consequently, I found his hypocrisy rather repellant.  Hartley seems to share my discomfort, but has addressed her subject with commendable skill and balance – her portrait of the soi-disant Inimitable is sympathetic without being sycophantic.

The eponymous house of fallen women was Urania Cottage in Shepherd’s Bush, established in 1846 by Dickens with the (mainly financial) help of the immensely wealthy Angela Burdett Coutts.  The philosophy behind the project was that it would give unfortunate women shelter from the dangers of society and prepare them for emigration to the colonies.  Unlike similar schemes, the emphasis was on recreating a safe and happy domestic environment, rather than ascetic conditions in which women were required to spend their time contemplating their sins.  Whereas Millbank adopted the silent system in which prisoners were forbidden to communicate, and forced its inmates to wear drab clothing, Dickens insisted that they must build friendships and wear bright clothing (rather like his own).

The staff were under strict instructions not to ask their charges about the past – the focus was to be on the future.  The women were able to learn to read, grow flowers, and enjoy good food; indeed it was a lifestyle far superior to most of their peers in the outside world.  Obviously, such luxury didn’t come cheap, but with an annual income equivalent to £5m, Miss Coutts was happy to bankroll the project if Dickens would manage to day-to-day running.
This was a role which he relished.  As Hartley writes, “this home for fallen women would be another total world for him to control.  Here he could create and run everything according to his rules.”  He concerned himself with the smallest detail and was personally involved in the progress of each woman.  Unsurprisingly, this was to the detriment of his own family, who felt neglected during this period, their household distinctly less cheery than that of Urania Cottage.  Although keen that the women should not dwell on the past, Dickens was emphatic that they should develop in line with his ideas of redemption.  Anyone who thought they could get free lodging and still cause trouble found themselves summarily ejected.  Of one lost cause, Dickens commented: “she would corrupt a nunnery in a fortnight”.

Over the years, Dickens expected an increasing amount of interaction with the women and did, in fact, start eliciting their stories, collecting them in what is known as the Case Book.  Unfortunately, it no longer survives, and Dickens’ plan to work it into a book were aborted.  This is perhaps the most sinister aspect of the story – Dickens uses some of the women in his fiction, and Hartley suggests some cases where his decisions regarding their future may have been dictated by the plot of the novel he was writing at the time.  There is a sense that these women were puppets in a private theatre show.  Hartley makes a compelling argument for Rhena Pollard being the inspiration for Little Dorrit‘s Tattycoram, and she also provides other examples, such as Martha Endell in David Copperfield.

Nevertheless, Urania Cottage was a fine example of mid-Victorian benevolence.  In 1853 Dickens reported to Coutts that out of the first 54 inmates, 30 had emigrated and built good lives in the colonies, 14 had left of their own accord and 10 had been expelled.  Hartley has done sterling work in tracking down some of the women who emigrated, even unearthing a photograph of ‘Tattycoram’.  The stories are immensely touching and would have been very different had those women not been given an opportunity to start a new life.  The experience of being in a pseudo family taught them how to love and to build relationships with others.  Unfortunately, it was Dickens’ own abilities in this area that led to the closure of Urania Cottage.  He met a certain Ellen Ternan and suddenly his fallen women became less compelling.  An irrevocable breach had also developed between him and Miss Coutts after she took his estranged wife’s side in the acrimonious marital separation.

Although constancy was not Dickens’ strong suit and his interest in Urania Cottage was not entirely selfless, he made a significant difference to many vulnerable lives.  The women who passed through its doors were treated with humanity and respect, possibly for the first time in their experience, and for this he should be commended unreservedly.  I’m rather wary when it comes to celebrities promoting good causes, but, whereas I’d very much like to slap Bono, Dickens is now giving me a warm fuzzy glow for the first time.  Jenny Hartley should also be commended for having written such a scholarly, touching and engaging account of these women who have now been given a second opportunity to shine.

Charles Dickens and the House of Fallen Women by Jenny Hartley