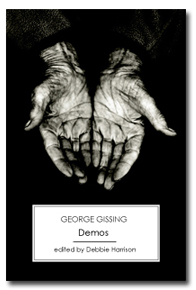 Bigamy, bisexuality, and betrayal form the sensational plot of Demos (1886), the third published novel from super-grump George Gissing. Although the novel’s sub-title – ‘A Story of English Socialism’ – doesn’t make it sound terribly exciting, politics and social unrest form the backdrop, and the foreground narrative is both tight and compelling.

George Orwell, perhaps anticipating Twitter, pithily described Demos as “a story of the moral and intellectual corruption of a working-class Socialist who inherits a fortune.” The Socialist in question is Dick Mutimer, a serious-minded mechanic who leaves behind his old life and in a slum district of London without the least compunction. Meanwhile, the presumed heir to the fortune, aesthete Hubert Eldon, returns from the Continent with a mysterious bullet wound and discovers that his comfortable position has been usurped by a rough young parvenu. Mutimer uses his new-found wealth to establish an ironworks and model village in the fictional Midlands town of Wanley, and is able to realise his long-held dream of improving the lot of Demos – the working man.

Mutimer’s project turns the “land of meadows and orchard” into an “igneous realm” with its “hundred and fifty fire-vomiting blast furnaces.” Everything, including the landscape, must be subordinate to the needs of Demos.
Not content with assuming Eldon’s wealth, Mutimer also covets his intended wife, the ingenue Adela Waltham. Adela is a “martyr to her mother’s miserable calculations”: once Mrs Waltham realises Eldon has no prospects, she coerces her daughter into accepting Mutimer’s proposal, even though they are ill-suited. Adela endures an unhappy marriage to a brutal and solipsistic man, and is thoroughly miserable until she is awoken, both sexually and spiritually, by the bewitching Stella Westlake.

Stella is one of the novel’s most intriguing characters: a pre-Raphaelite beauty, exuding charm, pheromones and quiet intelligence. She is based on William Morris’s wife, Jane, although I haven’t as yet established whether it’s an authentic portrait. The rest of the cast are all largely unlikeable, but also gruesomely compelling. Although he denies the reader a central hero, Gissing does at least have the decency to ensure that the good ultimately triumph and the wicked meet with a sticky end. It’s a shame the good have to suffer so much along the way, but it wouldn’t be Gissing without a liberal dose of misery. His description of the “chill desolation” of Manor Park Cemetery has been described as one of the most beautiful passages in English literature; it is also one of the most poignant.

Demos is Gissing’s fictional response to rapid social change. Hubert Eldon fears the 20th century, believing it to be the era of Demos, a ravening beast that will devour everything in its path. He is partly a mouthpiece for the author. Gissing was an inveterate snob who was fiercely critical of anyone getting ideas above their station. However, he also ardently believed that the workers should be treated much better, fiercely denouncing those who exploited the poor and the vulnerable.

Demos is exquisite, dramatic, and at times painful. Those familiar with Gissing’s first novel, Workers in the Dawn, will see in it his development as an author, as he gradually hones his craft. The success of the plot is perhaps demonstrated by the fact that Demos is the only Gissing novel to have been adapted into a Hollywood film. I’m quietly hopeful that the BBC will spot the dramatic potential of New Grub Street and The Nether World as an antidote to the tweeness of some recent adaptations. No doubt Cranford could be livened up considerably by an outbreak of biting and Miss Matty succumbing to drug addiction.

Gissing’s own verdict on Demos was: “In my private opinion, Demos is distinctly ahead of anything since George Eliot ceased to write.” There’s a tiny nugget of humility, if you really look for it. The author’s trumpet-blowing aside, Demos is certainly one of the finest literary achievements of the early Fin de Siècle.