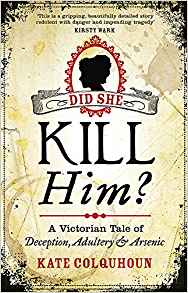 Anyone who saw the recent BBC documentary Hidden Killers of the Victorian Home knows that arsenic was everywhere in the late nineteenth century. It was used as a beauty product, as a medicine, and also to achieve a vibrant green colour in wallpaper. This ubiquity made it devilishly difficult to prove cases of deliberate poisoning and many murderers probably got away scot-free. When a case did make it to court, the nation was transfixed. Kate Colquhoun’s engrossing book recounts the 1889 trial of Florence Maybrick, a young American woman accused of poisoning her respectable English husband, James. This cause célèbre dominated the press and divided opinion and Did She Kill Him? evokes the febrile atmosphere of the courtroom.

The Maybricks met on ship in 1880, their romance blooming in the middle of the Atlantic. James was a 41-year-old cotton broker and Florence a 17-year-old ingénue, accompanied by her mother. Marrying the following year, they lived in Virginia before finally settling down in their suburban villa in Liverpool. Ostensibly a respectable middle-class marriage, outward appearances masked James’ infidelity and violence. While he spent much of his time in London with his long-term mistress, Florence amused herself by running up large debts and reading questionable novels. As the trial was to reveal, this was a deeply unhappy marriage.

James Maybrick wasn’t just a love rat, he was also a self-medicating hypochondriac who believed small quantities of arsenic to have an invigorating effect. When in 1889 he became ill, James’s response was to dose himself up with even more toxic potions; in the week leading up to his death, he was given no fewer than 20 harmful “medicines” by his doctors. The fatal dose was believed to lurk in a bottle of meat juice, this revolting beverage becoming central to the trial. Florence claimed that James had asked her to add arsenic to his dose, believing it would act as a restorative. While this was initially deemed plausible, the revelation that Florence had been entertaining herself with a flashy young man by the name of James Brierley made her actions appear deeply suspicious. Her habit of soaking arsenic-impregnated fly-papers for cosmetic use strengthened the claims of those who suspected her of mariticide. A bewildered Florence was soon arrested and taken into custody.

As Colquhoun explains, a jury comprising plumbers, grocers, and farmers was “charged with determining one of the most complicated toxicological cases of the day,” trying to establish whether a man addicted to arsenic could have been poisoned by that very substance. In the absence of any hard scientific evidence, Florence’s infidelity soon obscured the facts of the case. Judge James Stephen, uncle of Virginia Woolf, thought Florence had done her husband a “dreadful injury” by having an affair, believing this sufficient grounds for convicting her. Given the death penalty was still in place for murder, this was a staggeringly harsh attitude. The trial became “a national morality fable, the inevitable result of too much spirit or too little independence, depending on your point of view”. For some, Florence was a foolish and impressionable young woman who had attempted to care for her cold-hearted husband; for others, she was a callous adulterer who sought to free herself from a loveless marriage. Queen Victoria, never one to sit on the fence, thought Florence’s infidelity proof of her guilt and demanded that she be judged accordingly. Ultimately, the verdict proved inconclusive, and the debate raged for decades afterwards.

Colquhoun is rigorously impartial throughout her story, refusing to divulge her own verdict on Florence’s guilt, and presenting this labyrinthine case with clarity and verve. She doesn’t spare any gory details, although it’s hard to say whether the account of James’s autopsy or the forensic analysis of a profoundly dysfunctional marriage is more uncomfortable to read. There are no conclusive answers here, but through her effervescent narrative Colquhoun exposes bizarre medical practices, the public appetite for sensation, and the precarious position of the Victorian wife. Like Queen Victoria, I’m not one to sit on the fence: I thought Florence innocent of murder. She struck me as a naive and not very bright woman who was trying to relieve the ennui of her circumscribed existence through a fairly inept attempt at adultery. Even her own mother described her as a “woman of little penetration”. With hardly any money of her own, it was in her interests to maintain this sham of a marriage. You might not agree with my verdict, but you can’t fail to be stirred by a dramatic and moving story told by a gifted historian. This is quite possibly one of the most serious miscarriages of justice in recent times, although we’ll never know for sure. The Maybrick coat of arms bore the motto “Time reveals all” – but not in this case.

Did She Kill Him? A Victorian Tale of Deception, Adultery and Arsenic by Kate Colquhoun is available in hardback and Kindle editions.