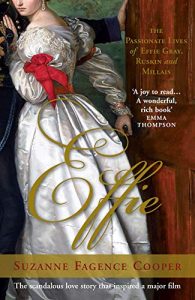 History has not been kind to Effie Gray. Her first husband, John Ruskin, was supposedly terrified by her lower portions on their wedding night, while exasperated historians have blamed her for ruining the career of her second husband, John Millais. In this moving biography, Suzanne Fagence Cooper puts Effie centre stage, and we see her for the first time as an individual, as well as within the context of her two famous marriages.

Euphemia Chalmers Gray (1828-97) was the oldest of fifteen children, of whom only eight survived. What might have been an idyllic childhood in Scotland was punctuated by premature death and continual grief. This sadness notwithstanding, the Grays were a lively and close family, and Effie was happiest when with them. She was just twelve when John Ruskin first set eyes on her, and he was nearly twice her age at twenty-one. It is fair to say that his taste was for prepubescent girls – a taste more socially acceptable in those days, but unutterably creepy in our own. For most middle-class Victorian girls, marriage provided the only opportunity for leaving the family home and seeing something of the world.  In marrying an up-and-coming art critic, Effie envisaged a life of glittering parties and international travel, never imagining the reality of what being Mrs Ruskin might entail.

After a long and bumpy courtship, the couple married on 10 April 1848, the very day the Chartists marched on Hyde Park, and during a tumultuous period that saw Europe gripped by revolutionary fever. This unrest set the keynote for the Ruskins’ unhappy six-year marriage, notorious for Ruskin’s inability to stage his own uprising. Their wedding night is, of course, legendary, and it is handled with great deftness by the author. Cooper makes a convincing argument that it is unlikely Ruskin was repelled by his young wife’s pubic hair. As an art critic, he was used to viewing salacious images and must have been prepared for the spectacle of a naked woman. What he hadn’t anticipated was menstruation, and Cooper believes he was revolted by this bodily function. He eventually confessed to her “that the reason he did not make me his Wife is that he was disgusted with my person the first evening”.

It was as though Effie had lost her enigma and thereafter Ruskin had no interest in her, other than as an attractive possession.  When she suffered another family loss, he became irritated by the interruption to his studies. Furthermore, his elderly and pernickety parents always came first, and they were equally protective of their son. Any visible marital problems were quickly ascribed to Effie’s faults. His mistake was in confusing art with life, commenting cruelly that “the Alps will not wrinkle … but her cheeks will”. As Cooper writes, “Sadly, he was so bound up with the big picture, he failed to see what was needed on a domestic scale,” acknowledging his brilliance as an art critic, but not accepting this as an excuse for his failings as a husband.

Effie wrote heartbreaking letters to her parents, imploring them to help her escape this “unnatural” relationship. Meanwhile, Ruskin’s advocacy of the Pre-Raphaelite Brotherhood brought the dashing John Everett Millais into their circle. This talented young artist was troubled by Ruskin’s neglect of his wife, becoming close to her when she sat as his model. It was clear to all that the marriage was doomed and both sides were focused on damage limitation. Ruskin bragged to his young sister-in-law Sophy that he could get rid of Effie whenever he wanted – an early lesson in masculine privilege that possibly affected her later life. He incorrectly assumed that his wife would do anything to avoid the ignominy of a medical examination, thinking he could have her declared insane and locked away. However, the evidence showed that Mrs Ruskin was still a virgin, nearly six years after her marriage.  The courts annulled the marriage, ruling that “John Ruskin was incapable of consummating the same by reason of incurable impotency.” Understandably embarrassed, he offered to prove his virility (goodness knows how), but this was declined. We’ll never know whether it would have stood up in court (so to speak).

Just under a year later, in July 1854, Effie was married to Millais. Although the Ruskin business was behind her, she wasn’t allowed to forget it. Queen Victoria refused to receive her at court, which seems remarkably hypocritical given the monarch’s own love of sex. That, at least, was not a problem in Effie’s second marriage, and she spent much of it pregnant, producing eight surviving children. Having such a large family to provide for turned Millais from the avant-garde to more commercial ventures, a decision that has been unfairly blamed on Effie. She might have encouraged him to become a portrait painter, but how else would he earn a living? Mr and Mrs Millais were not prepared to endure the grinding poverty experienced by Ford Madox Brown, the couple craving the position in society that his talent deserved. Going from one extreme to the other was a shock to Effie and family life brought more challenges, not least Millais’s Dickensian obsession with his sister-in-law Sophy, whose determination to remain his aesthetic ideal contributed to an early death from anorexia. After the artist’s death in 1896, Effie was able to return to her family in Scotland, the only place where she had ever felt truly at home.

Effie shines out from these pages as a strong and intelligent woman who deserved to become recognised in her own right, rather than as the wife of an eminent man. We see sixty years of Victorian life through her eyes, and she is a lively and engaging correspondent. Thanks in part to fifteen bundles of letters lent to the Tate Archive, the biographer has provided an intimate portrait of this fascinating character and it is difficult not to become completely absorbed in her world. Part of Cooper’s considerable skill is in not allowing her heroine to become overshadowed by her husbands’ achievements, or to be seen as a necessary sacrifice to their art. Effie is presented unapologetically as an ordinary middle-class woman, albeit one who led an extraordinary life.

Effie: The Passionate Lives of Effie Gray, Ruskin and Millais is available in paperback and Kindle editions.