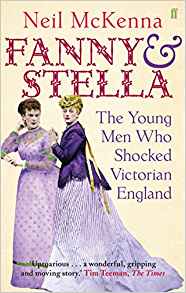 To be decadent in an age of utility was unforgivable, as Frederick Park and Ernest Boulton were to find out in a trial that scandalised London in 1870. Better known as Fanny and Stella, the two young clerks were arrested and charged with outraging public decency by dressing as women and “conspiring to incite others to commit unnatural offences”.  As there were no specific laws against cross-dressing and “unnatural offences” (ie buggery) were difficult to prove, the court case was as oblique as it was sensational.  In this enthralling account, Neil McKenna chronicles the arrest and cross-examination of Ernest “Stella” Boulton and Frederick “Fanny” Park by using court transcriptions and letters between the accused and their circle. Where there are gaps, McKenna uses his imagination, inhabiting their world seamlessly and appropriating the colourful language of fin-de-siècle London.

The jury took just fifty-two minutes to find Fanny and Stella “not guilty”, but the damage to their reputations had already been done, and they were obliged to adopt an uncharacteristically low profile. The building was already surrounded by a crowd baying for the “He-She Ladies,” as they were dubbed, and the press were obsessed with exposing them to ridicule.  Both had tried desperately to conform to traditional ideas of Victorian masculinity, but it wasn’t for them. They delighted in the camp seediness of the demi-monde, putting on performances and attracting attention (and business) from handsome young men. Stella had even managed to bag herself an aristocrat, Lord Arthur Clinton, with whom she lived as husband and wife. As her elective “sister”, Fanny often stayed with them, too. Their lively milieu included gaudy prostitutes called Lady Jane Grey and the Maid of Athens.

Although some of their activities would raise eyebrows even in today’s more permissive society, Fanny and Stella’s “crimes” were victimless. It came as a great surprise, therefore, to find themselves in a police station and subjected to deeply humiliating examinations. Even more surprising was the revelation that they had been under surveillance for a whole year, with police officers watching them day and night and also rummaging through their belongings. The court case served only to expose the hypocrisy and bigotry of those who sought to entrap them, especially those who derived perverse pleasure from their ordeal. The failure of the authorities to prosecute Fanny and Stella came as a huge relief to the liberal-minded, who feared that a guilty verdict would have initiated a crusade against anyone who dared to be different.

While Fanny and Stella had more detractors than supporters, their own families were surprisingly sympathetic.  Indeed, Mrs Boulton almost steals the show when she takes to the witness box. She loved her son for who he was, tenaciously supporting him throughout and not giving a hoot what anybody thought. Her refusal to believe that Stella was touting for business came across at the time as affecting innocence, but a modern cynic might see it as craftily disingenuous.

McKenna’s writing style is unashamedly camp as his subjects, but it suits the book perfectly, giving a sense of their exuberance and vivacity. His genuine enthusiasm and affection for the subject is evident on every page. The research is impeccable and story placed firmly within its historical context, without distracting the reader from the stars of this show.  Usually consigned to the footnotes of Victorian history, here Fanny and Stella are given the prominence they deserve.

Fanny and Stella is available in hardback and Kindle editions.