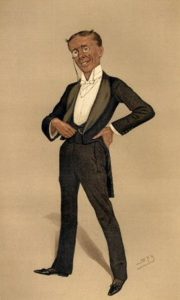 George Grossmith (1847-1912) is, of course, cherished by the nation for having penned the inimitable The Diary of a Nobody with his younger brother Weedon.  It is less well known that he was a talented entertainer, appearing in a number of Gilbert and Sullivan operas, and also touring with his own show.  Tony Joseph, in George Grossmith: Biography of a Savoyard, illuminates all areas of his life and career, giving a sense of his inestimable contribution to nineteenth-century culture.

Grossmith’s father, known as George I, was a Bow Street court reporter and also enjoyed giving public performances, particularly readings from Dickens’ novels.  It was rumoured that his delivery was even better than that of the novelist himself.  George Junior was to follow in his footsteps, both as a court reporter and in his love of entertaining an audience.  He was devastated when George I died at his club following a suspected stroke.  It is unfortunate that the news was broken to his wife in a rather thoughtless (although comic) manner.  The club factotum announced on her doorstep: “I’ve come to tell you your husband’s dead, here’s the sausages we found in his pocket, and would you mind paying sixpence for having the handkerchief laundered one of the members put over his face.”  History does not tell us the provenance of the sausages.

Although Grossmith derived little enjoyment from his court reporting, he was able to use his experiences to good effect by writing comic sketches for Punch.  However, even this work wasn’t entirely fulfilling, and Grossmith finally indulged his great love of performance by becoming a pianist and entertainer.  One of his early ventures was a tour with one Florence Marryat.  Marryat was a prolific novelist, playwright, spiritualist, magazine editor, actress and singer, and also happens to be the subject of my doctoral thesis.  Grossmith’s biographer describes her as: “galleon-like in appearance and movement, she had a presence that, to put it at its lowest, commanded attention.”  She was clearly what Trollope has referred to as a “woman of altitude”.  Their show was called Entre Nous and comprised a selection of Grossmith’s piano sketches, alternating with scenes and recitations in historical costume.  The finale was a 25-minute play called Cups and Saucers, featuring two characters: Mrs Emily Nankeen Worcester and General Deelah.  The tour took them around the United Kingdom and Ireland, with a mixed reception.  A train journey between venues brought them face to face with one of their harshest critics, who decided to lecture them on the evils of intemperance and the blessings of prayer.  An infuriated Florence Marryat pointed out that they were evils and blessings “of which we were all perhaps perfectly well aware but did not choose to have expounded to us by an impertinent stranger.”  Quite.

The tour led to Grossmith being offered a few other engagements, but his big break came when a certain Arthur Sullivan (partner of the equally famous Gilbert) invited him to take the eponymous role in their new opera, The Sorcerer.  This was the start of a long and fruitful relationship with the kings of comic opera.  Grossmith didn’t miss a single night of The Sorcerer and clocked up 195 performances of H M S Pinafore.  He was seemingly indefatigable and threw just as much enthusiasm and brio into the later operettas Patience, Iolanthe and Princess Ida.  In Patience, Grossmith played Bunthorne, a poet closely modelled on Oscar Wilde, to great critical acclaim.  He “passed from lackadaisical affectation to most exaggerated melodrama with humorous effect.”  His performance in The Mikado was also celebrated and was recently portrayed in the film Topsy Turvy.  Grossmith was perhaps not the most naturally talented of singers, but his stage persona was extraordinary and he made a vital contribution to the phenomenal success of Gilbert and Sullivan.  Sadly, a row over alleged over-acting brought an end to his career at the Savoy Theatre.

Although that was a sad day for British opera-goers, it was a glorious day for literature, as Grossmith turned his attention to the creation of another comic character: Mr Charles Pooter.  The Diary of a Nobody was originally serialised in Punch, the first installment appearing in May 1888, and it has delighted readers ever since.  The biography lists the events from Grossmith’s own life which influenced the mishaps and solecisms of Mr Pooter.  The oft-quoted “I left the room with silent dignity, but caught my foot in the mat” was inspired by the young Grossmith’s encounter with his father, who had accused him of drinking: “I bowed to my father with stilted politeness.  But as I approached the door I most unfortunately caught my foot in the rug and absolutely rolled on the floor…”.  He also used the Diary to parody his former partner, Florence Marryat.  Her book There is No Death is referred to as There is No Birth by Florence Singleyet.  We don’t know what she thought to this egregious pun, but she had already taken a pop at him in her earlier work, Tom Tiddler’s Ground.

This literary success was followed by a return to the comedy circuit.  Recent developments in theatre had provided a new wealth of materials, and Grossmith created a piece called The Ibsenite Drama:
She: Don’t keep secrets from me.  Are you still ill?
Dollghost: I am more than ill – I am dying.
She: You never told me that – you know that I am dying.  Don’t keep secrets from me.  Why are you dying?
Dollghost: I am dying because – because – it is hereditary.

By this time, history had repeated itself and another George Junior was in the ascendant, this time Grossmith’s eldest son.  Although proud of his achievement, Grossmith Senior had to cope with the fact that he was now famous for being someone else’s father.  The death of his beloved wife in 1905 was another blow.  Ever the professional, he distracted himself by embarking upon a farewell tour which was punctuated by ill health.  Although still relatively young, his thousands of performances had caught up with him, and he looked and felt much older than his years.  His last show was to be in Brighton, and the Brighton Gazette reported: “Never in our experience has he been in better form.  Never has he displayed a prettier wit or launched his satiric arrows with truer aim.”  Perhaps such plaudits made him decide this was a good point at which to bow out.  He retired to Folkestone and devoted his remaining energies to writing his memoirs.  He died at 2am on 1st March 1912, anxiously awaiting a telegram to tell him whether George Junior had been accepted by the Beefsteak Club.  His passing was mourned at Kensal Green Cemetery by the great and good of the theatrical world, and his life is celebrated every time someone reads of Mr Pooter painting his bath.