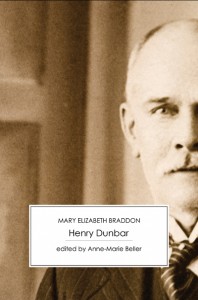 Mary Elizabeth Braddon is, of course, best known for her sensation classic Lady Audley’s Secret, with its infamous eponymous bigamist.  A contemporary critic actually thought Henry Dunbar (1864) superior, praising its “excellence of plot,” “animal vivacity,” and “boldness of incident”.  Not all reviewers were impressed, however.  Some were outraged by the central murder plot and Braddon’s handling of the theme of crime and punishment, in which she appears to argue against the death penalty.  Capital punishment was a hotly debated topic at the time, with public executions banned four years after the novel’s publication.  The compelling plot and topical themes made Henry Dunbar an ideal candidate for stage adaptation, and successful playwright Tom Taylor did the honours the following year, with Kate Terry appearing as the female lead at the Olympic Theatre.

Henry Dunbar, heir to the respectable bank of Dunbar, Dunbar and Balderby, is discovered to have defrauded the business by forcing his clerk, Joseph Wilmot, to forge cheques.  When confronted with his crime, he lays the blame squarely on Wilmot, refusing to take any responsibility for his actions.  His uncle banishes Dunbar to the firm’s Indian office as punishment, while his accomplice is summarily dismissed.  Having no other means of supporting himself, Wilmot re-offends and is eventually transported to Tasmania.  The novel’s main action commences when the two men meet again after 30 years, the crime and its consequences still raw in both their minds.  Wilmot’s daughter Margaret, a strong-willed young woman, turns detective in order to find out the truth surrounding the fateful reunion.

Margaret Wilmot is an early example of the lady detective, and through her, Braddon examines the fluidity of female identity and also the effects of a father’s crime on his daughter.  Although Braddon in this case is concerned mainly with the social implications of having a felonious parent, she also tentatively explores the idea of heredity, which came to dominate some of her later work.  Taylor’s stage adaptation was sub-titled ‘A Daughter’s Trials’, thus emphasising the importance of Margaret’s teleological experience.  Margaret, despite her determination, essentially conforms to feminine ideals, and appears tame in comparison with more transgressive female detectives, such as Leona Lacoste in Florence Marryat’s Her Father’s Name.  However, Margaret is more human, making it easier for the reader to engage with her quest, and her strength of mind sets her apart from other literary heroines.

In the scholarly introduction, Braddon scholar Anne-Marie Beller places Margaret within the context of other female detectives and considers recent criticism of the genre.  Anne-Marie examines the novel’s other main themes, and also compares it with the serialised version, which was made even more sensational to appeal to working-class readers.  The appendices include contemporary reviews, a parody of sensation fiction, and an extract from the script of the stage adaptation.

Henry Dunbar was one of the most financially successful of Braddon’s novels, with The Era commenting that its success “is a brilliant as the wing of a summer butterfly.  Let us hope it will be more enduring.”  As Anne-Marie writes in her introduction: “it deserves to be read today, not only as an interesting story in its own right, but also as a fascinating commentary on mid-Victorian ideas about class, gender, and crime.”  I would certainly agree, and think it is one of Braddon’s most accomplished and tightly-plotted novels.  Like The Era, I hope it endures a little longer.