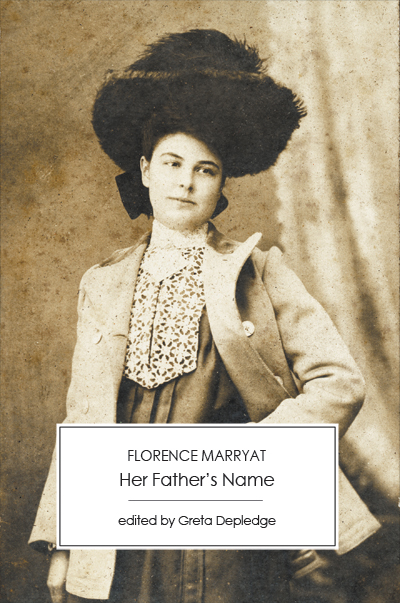 Now that I’ve finished writing my thesis on Florence Marryat (just a few tweaks and proofreading to go), I can take a more objective view of her fiction. Having read all 68 of her novels, it’s fair to say that they are not of equal merit; in fact, some are downright dreadful. With 7 children to support and a predilection for useless husbands, Marryat was obliged to write quickly, often completing a novel within six weeks and seldom revising her manuscripts. Her haste in evident in around half the novels, their pages yielding very little, even for this determined scholar. Every so often, however, Marryat would stun me with a novel of such originality that I was instantly reminded why I wanted to spend all this time and money on writing a thesis that perhaps half a dozen people will read.

Anyway, I’m often asked, “what’s the best Marryat novel?” Of course, pronouncing on “the best” of anything is a tricky matter, as one person’s masterpiece is another’s stinker. Artistically, I think Love’s Conflict (1865) her best novel, as she took great pains with the structure, although some of its power was lost through editorial changes made by Geraldine Jewsbury. For sheer entertainment and stimulation, Her Father’s Name (1876) trumps all the others. This novel has something for everyone: murder, sleuthing, cross-dressing, lesbianism, and hysteria.

The action opens in Brazil, with heroine Leona Lacoste dressed as Joan of Arc. Flanked by a toucan and a goat, she nonchalantly rolls a cigarette, pausing briefly to deflect a sex pest with her pistol. The reader is immediately alerted to the fact that this is no ordinary Victorian heroine. Accused of murder, Leona’s father commits suicide, prompting her to embark upon an international quest to clear his name. Obviously, a young lady couldn’t just go gadding about in the nineteenth century, so Leona dresses as a man and steals the identity of Christobal, a childhood friend who is desperate to marry her. She heads for London, managing to get involved in a duel during the crossing. With Leona there is no faffing about: she shoots her opponent straight in the chest. On arrival, she sneaks into her uncle’s house, posing as a merchant by the name of Don Valera. His adopted daughter Lucilla, a hysteric who has been confined to her couch since the onset of puberty, is overcome with lust, refusing to have any truck with the handsome doctor her parents wanted her to marry. Indeed, Lucilla/Don Valera is seemingly irresistible to nearly everyone, with all the society minxes falling at her feet.

As a sensation novel, Her Father’s Name relies heavily on coincidence and other improbabilities, such as trains running on time, but its wit and exuberance are joyous. I’m not going to spoil the plot, as I hope you’ll read it for yourself. Also, I’m not going to delve too deeply into my interpretations at this stage, as I’ve written quite a lot about the novel in my thesis. No doubt other readers will find all sorts of things that I failed to spot. Of course, you might well say that cross-dressing was hardly a new theme in Victorian fiction (see also E D E N Southworth’s The Hidden Hand and George Meredith’s The Ordeal of Richard Feverel), but I reckon that Marryat was the first to use this theme to make a strong feminist argument. After nearly four years of writing about this novel, I still love it, and Her Father’s Name epitomises why Marryat is such an important writer.

Yes, I liked the novel so much, I published it. Our edition, complete with introduction and notes by Greta Depledge, is available in paperback and Kindle editions.