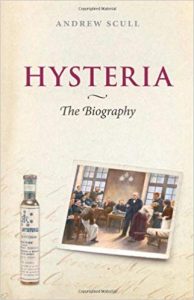 There can’t be many conditions more protean and elusive in nature than hysteria.  Andrew Scull’s Hysteria: the Biography is, therefore, a considerable achievement.  It is at once concise, detailed, eminently readable, and also peppered with pleasing literary allusions.

The story begins with hysteria’s uterine origins, and the ancient Greeks’ curious belief that it was caused by “the womb wandering around in search of moisture”.  Yes, quite.  Although it’s easy to be dismissive of such musings, not much progress was made in intervening centuries, and hysteria simply became an easy diagnosis for anyone who was behaving a bit oddly, and it often obfuscated underlying conditions such as tertiary syphilis, multiple sclerosis, tumours, and epilepsy.  Hysteria was also big business, with a profusion of quacks touting their patented remedies.  Sufferers of hysteria, and especially their families, desperately wanted to believe that is was a somatic, rather than mental, illness, and were willing to pay large sums of money for supposed treatments.

One “expert” who jumped on the eighteenth-century bandwagon was George Cheyne, a 32-stone Scot who had already built a successful career as (if you please) a diet doctor.  He did a roaring trade in wealthy patients for whom hysteria was a fashionable disease.  In The Rape of the Lock, Alexander Pope parodies such women who saw the “vapours” as a sign of superior sensibility:

Hail, wayward Queen!
Who rule the sex to fifty from fifteen:
Parent of vapours and of female wit,
Who give th’ hysteric, or poetic fit,
On various tempers act by various ways,
Make some take physic, others scribble plays.

Although many doctors were dismissive of hysteria as a medical condition, they were still happy to take their patients’ money.  Whilst Cheyne’s were entirely ineffectual, other practitioners adopted a more hands-on approach.  The self-styled gynaecologist Isaac Baker Brown thought that women were inferior creatures who were at the mercy of their reproductive organs.  He declared that the origins of hysteria lay in that unmentionable habit, “peripheral excitement of the pudic nerve.”  To prevent idle hands doing the devil’s work, his extraordinary solution was the remove the “cause of excitement” by means of a clitoridectomy.  The only small mercy is that his unfortunate patients were by this time able to benefit from the use of chloroform as an anaesthetic.  He claimed a 100% success rate with no recidivism.  One can only assume that it diverted those poor women’s minds from whatever had been ailing them.

Baker Brown was eventually stopped by his “professional” brethren, but not because of the appalling mutilation he was inflicting on his patients; rather, they objected to his “tradesmanlike” habit of self-promotion, which brought medicine into disrepute.  Only marginally less disturbing was the craze for ovariotomies, thought to be “therapeutic” for hysterical women.  Again, the discontinuation wasn’t due to qualms as to the justification of such butchery; instead, moral reasons were cited: who would marry a woman who was unable to reproduce?  If she engaged in sexual activity, it would be for enjoyment rather than procreation, thus making her no better than a whore.

Surgical intervention came to be replaced with the “rest cure”, which in many respects was no less pernicious in its effects.  Silas Weir Mitchell treated many prominent figures, such as Edith Wharton and Charlotte Perkins Gilman.  Gilman famously discredited him in her novella The Yellow Wallpaper, in which she disturbingly described the effects of the complete absence of mental stimulation he prescribed, which brought her “so near the borderline of mental ruin”.  The dislike he provoked in his patients was entirely reciprocated by Mitchell, who quoted Wendall Holmes in saying that the hysterical woman was “like a vampire, slowly sucking the blood of every healthy, helpful creature within reach of her demands.”  Unfortunately, he was not alone in his opinion, and it is hard to fathom how infantilising his patients and denying them any form of intellectual nourishment would make them any happier with their already restricted lives.

The work of the French neurologist Jean-Martin Charcot, although profoundly misogynistic, did at least take a less gendered approach to hysteria, believing as he did that men were equally susceptible.  He developed a method of diagnosis that involved applying pressure on a woman’s ovaries or squeezing a man’s testicles.  I can’t speak for the boys, but imagine that approach would provoke hysteria in the most lucid patient.  His most notorious patient was Blanche Wittman, dubbed the queen of hysteria, who played up to the role required of her.  After finally being discharged sixteen years later, she became Marie Curie’s laboratory assistant, and had both legs and her left arm amputated as a result of radium poisoning.  Another patient, “Augustine”, despite having suffered sexual abuse, was put on show in a state of undress.  She endured this inhumane treatment for five years, before escaping dressed as a man.

This fundamental insensitivity toward any entirely understandable explanations for hysteria persisted into the twentieth century, thanks to Uncle Sigmund.  His unwelcome contribution was to blame the victim for the abuse they suffered and attribute hysteria to feelings of guilt.  Unsurprisingly, a decreasing number of patients were prepared to submit themselves to an expensive session on the couch with a psychoanalyst who would conclude that they were either mad or sexually depraved.

Hysteria, or at least reported cases of it, petered out during the last century and it was officially excised from the list of recognised disorders in the early 1970s.  Interestingly, psychiatrists protested at this change, worried that they were losing a lucrative condition to treat.  Of course, it persists as a term of abuse: a woman who expresses her emotions strongly is “hysterical”, whereas a man exhibiting similar behaviour is justifiably angry/upset.

Scull draws interesting parallels with Chronic Fatigue Syndrome, although they are undermined somewhat by his apparent scepticism. The obvious similarity is the reluctance of the medical profession to take seriously a condition that is tricky to diagnose and even trickier to treat.  However, I don’t think it’s helpful to suggest that CFS will come to be seen as a catch-all term for a reaction against modern life, in the same way that hysteria was thought to be the corollary of a woman fighting her biological destiny.  There is already much research to show that CFS is a somatic disease.  I hope the, dare I say, hysterical attempts to dismiss it as yuppie flu will soon seem as ridiculous as some of the treatments meted out to the patients of Cheyne, Charcot and Freud.