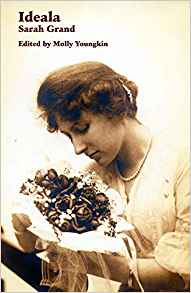 Sarah Grand’s Ideala is one of the early New Woman novels.  The eponymous heroine grapples with the decision of whether to leave her domineering and adulterous husband for another man, or to become an elective singleton and reject the need for a normative relationship.  The story is narrated by her friend Lord Dawne, who struggles to understand her need to question her role in society.  He cannot understand why she would renounce the respectability and stability of marriage, but Ideala finds greater meaning in performing charitable works, writing poetry, and experiencing other cultures.

Ideala partly reflects Grand’s own experience, as she left her own unhappy marriage and established herself as a professional writer and feminist campaigner in London.  The narrative explores how women sought ways to overcome the legal and economic restrictions placed on them by marriage.  Ideala argues that the marriage laws should be reformed and takes issue with the oath of obedience required of women, describing it as “farcical”.  She asks: “If men were all that they ought to be, wouldn’t we obey them gladly?”  Indeed, there is much discussion of the inadequacy of modern men and the “death of manliness”, Ideala believing that all the best men went into the church and failed to propagate their superior genes.  The marriage contract is shown to be one-sided, with men pursuing infidelities yet demanding loyalty from their wives.

In addition to the sexual double standard, women are also shown to suffer from not being taken seriously.  Lorrimer, with whom Ideala falls in love, refuses to admit female patients to his sanatorium because he thinks all their problems are simply down to “sentimentality, hysteria and silliness”.  There is dismissive talk of women novelists, who engage in the serious art of “making the worst ideas attractive”.  Ideala complains that men condemn such books and insist that women should do as they say, rather than as they do.  There is also a barely-concealed rebuttal of Eliza Lynn Linton’s attack on the “shrieking sisterhood”, pointing out that women shriek for a reason, usually because they’re in pain.

Lord Dawne believes Ideala has a responsibility to society rather than to herself, and urges self-sacrifice.  She comes to agree, but from a rather different perspective, deciding to do good works in the community, rather than to uphold societal norms.  This element was undoubtedly influenced by the much earlier Not Wisely But too Well (1863) by Rhoda Broughton, in which Kate Chester becomes a Protestant Sister of Mercy, rather than submit to the shackles of marriage.  As it is an open religious community, she has much more freedom that she would have done as a wife.  I’m rather pleased to have spotted this similarity, having asserted in my dissertation that Broughton’s work prefigured that of some of the New Woman novelists. Through her heroine, Grand also argues for greater education of women.  She believes this would be a natural check on overpopulation (a less sinister manifestation of Grand’s interest in eugenics).

Apart from the important consideration of gender relations, Ideala is interesting in terms of its narrative structure.  Grand uses a proto-modernist technique, and there is a marked departure from the Victorian realist tradition.  Ideala’s consciousness is central to the novel and the reader sees both subjective experience and shifting perspectives.  The first half of the novel is firmly modernist, lacking any form of plot, and mainly comprising Ideala’s stream of consciousness.  Her thoughts are not always clear, a deliberate tactic on Grand’s part, as she wanted the “imperfections” to be studied.  The reader witnesses the ingenue at the beginning of the novel undergo a teleological experience and become more worldly by its conclusion.

Molly Youngkin provides an informative introduction to another excellent Valancourt Books edition.  A wealth of contextual information is included, along with contemporary reviews.  The critical response was something of a mixed bag, with the Saturday Review describing it as “the story of a nasty-minded woman”.  However, other critics praised the realist portrayal of Ideala’s dilemma, and Mrs Oliphant was a most unlikely advocate.  Mind you, I have learned from rummaging in her earlier reviews that Mrs O will forgive a feisty heroine many solecisms, so long as she doesn’t succumb to the temptation of adultery.  I’m was pleased to discover that both Ideala and Lord Dawne also make a cameo appearance in The Heavenly Twins, although I might have to spend a bit longer at the gym before I can manage that extraordinarily heavy book.