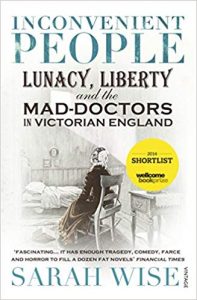 The trouble with reading a lot of Victorian potboilers is that they start to seem like reality. The madwoman in the attic is a pervasive image throughout nineteenth-century culture, from Bertha Mason, through to Laura Fairlie and Lady Audley. In this gripping and insightful study, Sarah Wise reveals that it was actually husbands who were most at risk of being detained against their will. It makes sense when you think about it: men were the main inheritors of wealth, also assuming their wife’s property upon marriage. Consequently, there was a “high bar” set for men to prove themselves fit to control that wealth, and every incentive for their enemies to demonstrate otherwise.

In Inconvenient People, Wise focuses on twelve case histories, embellishing them with details from many more, and the depth of research builds a rich narrative. Some of the stories are harrowing, other plain bizarre, and there’s also the occasional moment of levity, such as the man who thought one of his legs belonged to Madame Vestris. Wise has an acute eye for comic detail, but never trivialises the subject.

The case I found most haunting was that of Edward Davies, a socially awkward tea trader from London, whose mother confined him to a lunatic asylum so that she could seize his share of their flourishing business. His gaucheness was almost his undoing, with every action seen as confirmation of his insanity. He suffered greatly from the loss of privacy and dignity; continuously under surveillance, even his bowel movements were observed and measured.

Of course, the stereotypical madwoman in the attic did have some basis in fact, perhaps epitomised by the unhappy wife of the uncelebrated author, Edward Bulwer-Lytton. Wise made me squeal with delight when she described his “flatulent, mouldy prose style’. He didn’t have much to commend him as a human being, either – sending his children to a boarding house when they were will, and insisting they addressed him as “Mr Bulwer”. Bulwer-Lytton also mistreated his bewitchingly beautiful wife, Rosina. When eight months pregnant, he made her repeatedly climb the library stairs to fetch books, kicking her in the torso when she protested. This was one of many violent attacks. Unlike many Victorian women, Rosina refused to suffer in silence, publicly humiliating her husband whenever she got the chance. When he campaigned to be elected as an MP, Rosina made a surprise appearance at the hustings, prompting him to run away in terror (some accounts claim he fainted). She then lectured the assembled throng on her husband’s shortcomings. Bulwer-Lytton wreaked his revenge by having her confined to an asylum, beyond the reach of friends and family. Even there she was able to attract attention, loudly proclaiming to passers-by that Disraeli was a sodomite and having an affair with her husband. Although her remaining years were marred by bitterness and ostracism, Rosina did at least have the satisfaction of outliving her husband by seven years.
The redoubtable Georgina Weldon was more effective at curtailing her own husband’s attempt to bury her away. In court, she successfully challenged both him and the mad-doctors who had tried to snatch her at his behest. Her experiences subsequently influenced a change in the lunacy laws, as she had clearly demonstrated how a sane person could be detained for no good reason.

As Wise observes, part of the problem lay in the definition of “sanity”, which she describes as “a Mad Hatter’s tea party of shifting positions”. All too often, “insanity” meant a failure to conform to somebody else’s expectations. Unfortunately, some lessons were not learned, and the book concludes with the depressing story of three women discovered languishing in an asylum in the 1970s. Between them, they had served 110 years for having a child out of wedlock in the 1920s. It’s a particularly chilling example and one that illustrates perfectly the abuse of power that underpins our definition of madness.

Inconvenient People is an important book and one that contributes an enormous amount to our understanding of the nineteenth century.