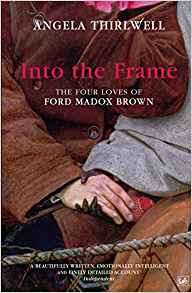 Ford Madox Brown (1821-1893) is perhaps most famous for being on the margins of the Pre-Raphaelite Brotherhood, but was overshadowed by more dominant figures, such as Dante Gabriel Rossetti and William Holman Hunt. Whereas works like ‘The Last of England’ form a legacy of his brilliance, the man behind the easel has remained elusive. Angela Thirlwell’s Into the Frame is a joint portrait of the four women who influenced Madox Brown: his two wives, Elisabeth and Emma, and the two women with whom he had very intense (but not necessarily sexual) relationships, Marie Spartali and Mathilde Blind.

Madox Brown’s ‘outsider’ status was due partly to his having been born in France, where he spent his formative years. Following the early deaths of his mother and sister, he became close to his first cousin, Elizabeth Bromley. They fell in love and married, leading a peripatetic life on the continent. Their son died after only a few days, but their daughter Lucy, born in 1843, was stronger and went on to become an artist. Although his daughter was spared, Elizabeth was not; she died of TB aged just 27.

Two years later, Emma Hill, an alluring young model, entered Madox Brown’s life. She overcame an underprivileged and illiterate background to become the second Mrs Madox Brown. Although determined to improve herself, she battled with a drink problem and was never able to overcome it. The marriage was tempestuous but endured, producing three children. They suffered poverty, with Madox Brown struggling to earn enough to maintain his family – a life that was more Desperate Remedies than Desperate Romantics. Emma was also her husband’s most significant model, and it is she who appears in ‘The Last of England’ – a painting that becomes mesmerising when read in the context of their marriage.

This marriage weathered the storms of Madox Brown’s obsession with other women. Marie Spartali, a well-educated and wealthy Anglo-Greek heiress was the antithesis of Emma, and inevitably there was tension when she became Madox Brown’s pupil. Although the great artist found himself utterly bewitched by his protégé, she instead fell in love with William Stillman, a handsome but worthless cad. I shared Thirlwell’s incredulity at how this beautiful and talented young woman could throw away the best years of her life on a man without any redeeming features. Standing an exceptional 6ft tall, Spartali was perhaps drawn to one of the few men taller than herself. They formed an imposing couple and were dubbed the ‘Lankies’ by William Michael Rossetti. The dynamics of this complex web are captured with skill – Madox Brown’s obsession for Spartali matched by hers for Stillman.

As if the household weren’t complicated enough, the Madox Browns were also joined by the German-Jewish writer Mathilde Blind (pronounced ‘Blint’), who had immigrated to England as a child after the revolutionary upheaval of 1848. Blind was an intellectual heavyweight and shared her host’s radical views and lack of religious belief. She was a free spirit, enjoying relationships with both men and women, but always avoiding long-term commitment. Her forthright views destroyed an early friendship with the novelist Rosa Nouchette Carey (with whom I suspect she was also romantically involved). The arrival of Blind in the story brings with it a superb evocation of the political turmoil of 1840s Europe and a deliciously acerbic portrait of Karl Marx.

Although Ford Madox Brown was not as flamboyant or exciting as some of his contemporaries, he emerges from this study as a complex and beguiling man. Thirlwell’s oblique approach of exploring him through the women in his life is both refreshing and accomplished. Madox Brown’s relationships with these four figures were complicated and turbulent, but he treated them all with kindness and loyalty. The historical context is impeccable, providing a succinct but satisfying sense of contemporary events. As an art specialist, Thirlwell is particularly captivating when describing Madox Brown’s work, leaving me with a desperate urge to view his paintings (now dispersed among various galleries).

Into the Frame is an enchanting blend of art history and biography, set against an expertly-drawn backdrop of nineteenth-century struggles – struggles that were also played out in Madox Brown’s own life.

Into the Frame: The Four Loves of Ford Madox Brown by Angela Thirlwell is available in paperback and Kindle editions.