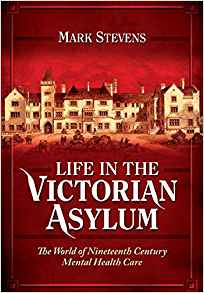 The mention of Victorian asylums often evokes images of despairing souls, incarcerated by sadistic wardens. While we might sigh with relief at our good fortune at living in more enlightened times, archivist Mark Stevens’s insightful new book offers a completely different perspective. Cleverly written in the style of a handbook for new arrivals, Stevens deftly adopts a Victorian tone, but with twenty-first-century sensibilities.

The reader is invited to join the guide on a virtual tour of a typical nineteenth-century asylum – a composite based mostly on the model of Moulsford Asylum in Berkshire. We learn about the architecture, the daily routine, and treatments offered through what is described as “the very latest in lunatic healthcare”. The guide calmly explains the possible reasons for admission, which might include “wandering aimlessly”, exhibiting “unusual facial expressions”, or “a belief that you can predict high tides”. Everything is carefully designed to provide a sanctuary from the outside world, with thoughtfully designed surroundings and professional staff. Well, not all the staff behave professionally. The guide reluctantly relates the story of the chaplain who eloped to Uxbridge with the local schoolmistress, and the porter who couldn’t resist dropping nuts down the dresses of younger colleagues.

It’s clear that the patient is treated as someone who ought to be helped, rather than a burden on the state. As our guide explains, three times the weekly allowance for a pauper in the workhouse is spent on the asylum inmate. This is in recognition that they are not responsible for their condition: they are the deserving poor. The contrast is keenly apparent in the architecture. With generously proportioned windows, elaborate brickwork, and plentiful fireplaces, the asylum presents a welcoming edifice, unlike the minatory appearance of the workhouse. And there’s no pointless labour. Instead, the patients are provided with plenty of reading material and stodgy food – a regime thought to promote well-being and an amenable temperament (it would certainly work for me).

The second half of the book includes a real-life history of Moulsford Asylum, accompanied by an illuminating discussion of Broadmoor – perhaps the most famous institution of its type. Stevens is also the author of Broadmoor Revealed, which explores the lives of its more notorious inmates. The book concludes with some compelling thoughts on the legacy of the Victorian asylum. Stevens acknowledges the views of those who believe the asylum system was simply another instrument of poor law oppression, but urges us to reconsider these institutions as the embodiment of an altruistic belief in the possibility of a better life for those suffering from mental health problems. As he argues, the current provision in the UK is woefully adequate in comparison. While none of us would want to be swaddled in cold flannels or medicated with toxic substances, such treatment was based on imperfect understanding, rather than on deliberate sadism. Victorianists will rejoice in the absorbing detail, acuity, and compassion of this book.

Life in the Victorian Asylum: The World of Nineteenth-Century Mental Health Care by Mark Stevens is published by Pen & Sword Books and currently available in hardback and ebook editions. The publisher kindly sent me a review copy.