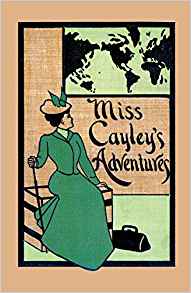 After vowing to never read another Victorian novel, I find myself teetering on the brink of the 20th century with Grant Allen’s Miss Cayley’s Adventures.  Published in 1899, it features the redoubtable Lois Cayley, a Girton graduate who refuses to enter the teaching profession, instead becoming a self-styled adventuress.  With only twopence in her pocket, she manages to travel around the world, solving mysteries and trying her hand at a number of professions.  A particularly enjoyable chapter sees her taking part in a mountain biking competition and landing herself a job selling bicycles in Switzerland.  Other escapades include setting up a typing agency in Florence with her conservative and downtrodden friend, Elsie.  It’s hard to imagine that Alexander McCall Smith hasn’t read this book, as Lois is very much a nineteenth-century Mma Ramotswe.  Despite a rather conventional conclusion, the book is fairly progressive for the time, in terms of Allen’s treatment of both gender and race.  He also created one of the earliest literary female detectives.  Well done to Valancourt Books for reissuing it.