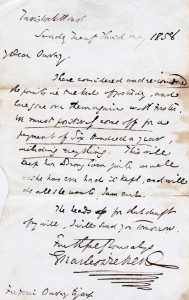 It’s not often that Florence Marryat makes the national press, so this has been an exciting week. An unpublished letter from 1860 has emerged in which Charles Dickens berates Marryat for requesting advice from him. She offered a short story for inclusion in his journal All the Year Round, hoping that he would also give her a critique. Of course, it’s perfectly usual for authors to solicit feedback from editors, and Dickens was actually a close friend of her father, fellow novelist Captain Frederick Marryat. Poor Florence must’ve been rather miffed to receive a three-page snotgram in response.
Bonhams, who are to auction the letter on 16th March, have described Dickens’s reply as “wonderfully rude”. Refusing to enter into further discussion, he writes:

I do not think it is a good story. I think its leading incident is common-place, and one that would require for its support some special observation of character, or strength of dialogue, or happiness of description. … I cannot, however, alter what seems to me to be the fact regarding this story (for instance), any more than I can alter my eyesight or my hearing.

Warming to his theme, Dickens goes on to say:

You have no idea of the labour inseparable from the editing of such a Journal as All The Year Round, when you suppose it within the bounds of possibility that those who discharge such duties can give critical reasons for the rejection of papers. To read professed contributions honestly, and communicate a perfectly unprejudiced decision respecting every one of them to its author or authoress, is a task, of the magnitude of which you evidently have no conception.

He could just have been having a bad day, of course, and she later dedicated one of her books to him so does not seem to have held any grudges. 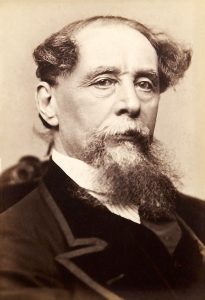 Future relations were certainly more cordial, and Marryat continued to ask Dickens for favours – she was never afraid of exploiting literary connections.  This is not to say that she didn’t hold a grudge, though. Marryat was highly skilled in the art of the passive-aggressive book dedication. Her novel The Girls of Feversham, a story in which a family is shown to function very happily without a mother, is dedicated to Marryat’s own mother, with whom she had a very restrained relationship. And the novel she dedicated to her first husband is called Too Good for Him. Ouch.
Marryat never won Dickens’s approval. He later detected a “certain coarseness” in her writing and thought her “unwise in touching on forbidden topics”.  Those “forbidden topics” were allusions to extra-marital sex and prostitution in Marryat’s novel The Confessions of Gerald Estcourt. When she dedicated her bigamy novel Veronique to Dickens, he responded with a rather uncomfortable letter of thanks.
Whatever she felt about Dickens’s contumely, Marryat remained undeterred. She went on to write 68 novels and hundreds of short stories and articles. Marryat also became the respected editor of the journal London Society, and certainly seems to have handled her would-be contributors more delicately.