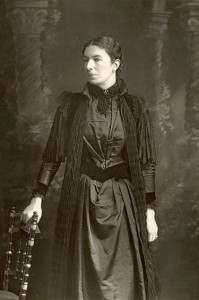 Mary Augusta Ward (1851-1920) is one of the many intriguing Victorian personalities who make the nineteenth century such a perfect place for academic rummaging.  John Sutherland’s biography manages to successfully evaluate both the writer and the woman, with just the right balance between it being scholarly and accessible.

Ward was born in Hobart, Tasmania into a veritable Victorian dynasty:  the Arnolds.  Her grandfather was the infamous Dr Thomas Arnold of Rugby and her uncle was Matthew Arnold, affectionately known as Uncle Matt.  Dr Arnold had an astonishingly strong work ethic, much parodied by Lytton Strachey in Eminent Victorians, and this both inspired and alarmed his family.  Although he rather undermined his own teachings by dying at the age of just 47, he continued to exert a powerful influence over the other Arnolds.  According to Sutherland, his “dead but inextinguishable presence loomed over their subsequent lives like some deity in a Greek tragedy.”

As is often the case, his strength of character was not inherited by his eldest son, Tom (Mary’s father), who was permanently tossed on the horns of a dilemma.  His conversion to Catholicism scuppered his chances of a plum job in Australia, and the family were forced to move to England.  His outraged wife vented her frustration by hurling a brick through the window of the local Catholic cathedral.  Although Tom finally landed a job in Oxford and set up home there, Mary was banished to boarding school for eight years, while her siblings were allowed to remain in the bosom of the family.  There appears to be no evidence to suggest why she was effectively quarantined, but her tempestuous nature might have been deemed to be a bad influence.  There is one documented incident where she was discovered flinging buttered slices of bread at her governess.  This exclusion during her formative years unsurprisingly left its mark on Mary, and she craved affection and approval throughout her life.  Sutherland becomes rather too psychoanalytical at various points, seeing a father-daughter dynamic in all her subsequent relationships with men.  I think he overlooks the fact that most women were treated as children and were naturally deferential towards men.

More plausible is Sutherland’s assertion that Tom’s weak character was “as malign an influence on his family as any wife-beater, drunkard, adulterer or gambler”.  His tergivisations brought shame upon the Arnolds and seriously affected his ability to earn a living.  Extraordinarily, he later converted to Anglicanism, only to again renounce his faith in favour of Catholicism.  In the meantime, scant attention was given to his children, and the highly intelligent Mary received only a rudimentary education.  She was clearly being prepared for marriage, and no other option was available to her.

Humphry Ward was one of seventeen children.  His poor mother died at the age of 42, presumably exhausted.  Like Mary, he would have received little attention from his parents, but did at least have the opportunity of going to Oxford.  He became great friends with Walter Pater, and it seems that they enjoyed an unlikely romantic tryst in Sidmouth.  Although not quite the useless cipher of a husband with whom many Victorian women novelists were lumbered, Humphry had an unremarkable career, and the family soon became reliant on Mary’s writing.  He managed to eke out a living as a journalist, but would fritter away more money than he earned on largely unsuccessful art speculations.  Perhaps to compensate for his failure, Mary was keen to subsume her identity into that of her husband – styling herself throughout her career as Mrs Humphry Ward – what Sutherland pleasingly refers to as a “chattel name”.

Her status as a writer was finally endorsed when she established that all-important room of her own when the family moved to London in 1881.  It was here in 1885 that she conceived her most famous work, Robert Elsmere.  She wrote to her publisher that she had the novel all planned and that she would take “five quiet months in the country to write it.  It will be in two volumes.”  Anyone who has ever had to produce a long piece of written work will be aware of the extreme folly in setting aside a block of time and banking on it being quiet.  The gestation period of what she referred to as her “baby” was actually three years, and the first draft weighed in at an eye-watering 1,358 pages – around three times the length of the average three-decker.  Consequently, she was forced to embark upon the painful journey of excising large chunks of the narrative, before finally publishing the novel in February 1888.  Sutherland remarks that it took an inexplicably long time for reviews to appear.  However, those who have read Robert Elsmere will know that even the revised version is still a weighty tome of around 800 pages, much of it dealing with theological debate, so the reviewers couldn’t really be expected to rush out a considered response within a few days.   The Times called it “a clever attack upon revealed religion”, and William Gladstone’s copy was annotated with objections to Ward’s heterodoxy.

In the Victorian age, nothing was more likely to generate publicity than religious controversy, and Robert Elsmere became a runaway success.  Mrs Humph made around £4,000 in royalties, which would today put her in the millionaire author bracket.  As Sutherland writes, she became a “money-generating fiction machine,” earning around £45,000 over the next decade.  She would have earned more if it weren’t for the absence of international copyright laws when Robert Elsmere was first published.  Many cheap US editions were hurriedly produced to cash in on its success.  Some were sold as loss leaders for just 4 cents, and other copies were given away free with every cake of Maine’s Balsam Fir Soap.  Apparently, this special offer was supposed to convey the idea that cleanliness was next to godliness.

In addition to maintaining her prodigious literary output, Ward was also involved with a number of causes.  She was the moving spirit behind the establishment of Somerville College, and chose the name as an homage to the mathematician Mary Somerville.  She also masterminded the establishment of the Passmore Edwards Settlement, an invalid school, and by 1906 there were 23 special schools for disabled children.  Unfortunately, her extraordinary achievement in this hitherto neglected area was greatly undermined by her rather repellent views in other areas.  Like many people, she became increasingly conservative with advancing years and became manifest in her anti-Boer, anti-Home Rule and anti-female suffrage stance.  It was the latter position that severely affected her transition from Victorian to Edwardian.  As Sutherland writes, her “implacable crusade to deny women the vote was as offensive to most under thirties as a campaign to send little boys back up chimneys.”  She became seen as an inveterate Victorian at a time when that epithet was entirely pejorative.  Lytton Strachey mercilessly lampooned her, and Max Beerbohm reviled her as “Ma Hump”.  Somerville College was eventually moved to disown her, as her ante-diluvian views were hardly compatible with an institution seeking the advancement of women.

Although rejected by the more progressive sections of society, Ward was embraced as a much welcome figurehead for the parliamentary anti-suffragists.  Here was a successful woman who felt no need to have the vote.  Indeed, she thought the very idea unseemly and cried “For Heaven’s sake, don’t let us be the first to make ourselves ridiculous in the eyes of Europe!”  She helped establish The Women’s National Anti-Suffrage League in 1908 and campaigned extensively against the suffragists, also using several of her novels to criticise them.  Although believing that women had no place in politics, she still saw fit to orchestrate her feckless son’s election campaign, writing his speeches for him and reminding him to wrap up warm when he was on the hustings.  He was ridiculed as “the member for Mrs Humphry Ward”, and the Suffragettes would send him postcards after his anti-suffrage speeches saying “Mother will be pleased!”

The First World War was something of a mixed bag for Ward.  She enjoyed a resurgence in popularity after writing propaganda such as England’s Effort, and her anti-suffrage work was placed on hold.  However, there was little demand for her fiction and the new super tax relieved her of much of her fortune.  Her husband and son did their best to relieve her of the rest.  Her beloved homes in London and Hertfordshire had to be let to Edith Wharton and she never recovered her former social status.  Her final triumph came when she successfully lobbied Parliament to make provision for physically disabled children in the Education Bill of 1918.  One can only agree with Sutherland’s sentiments that she could have enjoyed many similar worthwhile successes had she not wasted 10 years trying to deny women the vote.

Ward’s body finally gave up on her in 1920, after many years battling debilitating pain and gynaecological problems for which she took liberal quantities of cocaine (“It works like magic”).  Virginia Woolf commented: “Mrs Ward is dead; poor Mrs Humphry Ward; and it appears that she was merely a woman of straw after all – shovelled into the ground and already forgotten.”  There is perhaps an element of truth in this characteristically unkind assertion, but Ward has left a legacy as powerful as that of her grandfather.  Aside from her variable literary output (some of it truly great), she made laudable progress in the fields of women’s education and the treatment of disabled children.  The Passmore Edwards Settlement still exists, now as the Mary Ward Centre, and Somerville College enabled women to educate themselves for paths other than marriage.

Unfortunately, these inestimable achievements have been overshadowed by her work with The Women’s Anti-Suffrage League.  It seems incomprehensible to the modern reader that such a formidable woman would not wish to be enfranchised.  This biography doesn’t offer any explanations, other than suggesting that she was simply seeking to please father figures.  However, she was far from the only woman novelist to hold such views.  There are obvious parallels with fellow anti-suffragist Mrs Oliphant, who was also required to be a fiction machine in order to support her ineffectual menfolk.  I wonder whether they both dreamed of a life in which they could inhabit the traditional female sphere and were not relied upon as the main breadwinner?  They share a certain nostalgia for an age which probably never existed, and also a resistance to the inexorable pace of social change.  Although Mrs O hopped the twig in 1897, Ward was forced to face the onslaught of the twentieth century.  Her inherent contradictions are what make her so fascinating.