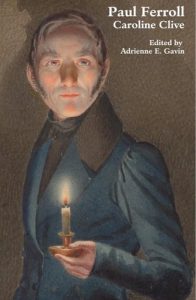 Referred to by G A Sala as “that remarkable and eminently disagreeable fiction”, Caroline Clive’s Paul Ferroll is a rare example of a unique novel.  Published in 1855, it could be described as an early sensation novel with a strong element of psychological drama.

Although the eponymous Ferroll is the embodiment of a successful Victorian gentleman – he is an eminent author, respected magistrate and friend of the local gentry – there is a cold-blooded killer lurking beneath the respectable exterior.  The reader gradually learns that he murdered his first wife in order to marry his true love, Elinor, with whom he goes on to have a daughter.  Although his neighbours gossip about the unseemly haste with which he re-marries, they cannot imagine that a man of his standing could have committed such a crime.  Instead, a servant is charged then acquitted, and subsequently emigrates to Canada in order to escape the scandal.  It is the return of this servant after eighteen years that prompts Ferroll to publicly confess his crime.  Although sentenced to death at the conclusion of a dramatic trial, he manages to escape to a new life in Boston.

Murder plots, of course, are not unusual during this period.  However, the extraordinary element of this novel is that the author fails to condemn the actions of the murderer.  The reader is forced to act as judge in the complete absence of any authorial guidance.  The other characters judge him, but are swayed by his social status into exonerating him.  Readers were used to neatly resolved narratives, where the good ultimately prospered and the wicked came to a sticky end, so reading Paul Ferroll was a profoundly new and destabilising experience.

The clever construction of the novel excited much admiration, but critics were horrified by Ferroll’s ability to escape punishment for his crime.  Public opinion was so strong that Caroline Clive in the fourth edition added a chapter in which he was brought to his death.  She also published a prequel, Why Paul Ferroll Killed his Wife, showing how he had been driven to murder by the unreasonable behaviour of his first wife.  Beyond the scandal it caused, the novel had a powerful legacy, as its influence is clear in the work of authors such as Wilkie Collins and Mary Elizabeth Braddon.

It is odd there hasn’t been a major edition for many years.  Valancourt Books‘ offering, therefore, is particularly welcome, with its characteristic wealth of contextual material.  The introduction by Adrienne E. Gavin is illuminating on the relatively unknown life of Caroline Clive, which reads like a Victorian novel in itself.  Born to an MP and his wife in 1801, Clive was left lame by polio at the age of two.  Elizabeth Barrett Browning rather uncharitably described her as “the ugliest woman I ever saw in my life”.  Despite this apparent disadvantage, she won the heart of a handsome man, inherited some money, and led a deliriously happy life for many years.  Happiness turned to tragedy, however, when a series of accidents left her seriously injured and in a wheelchair.  A severe stroke then left her with severe paralysis, putting an end to her writing career.  She was fatally injured when her dress caught fire in her library, and the newspapers that were surrounding her created an inferno.  A tragic end to an exceptional talent.