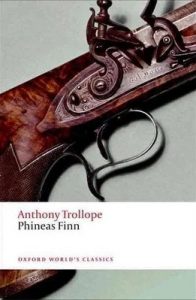 The second of Trollope’s Palliser novels, Phineas Finn, is also the first of his works with a predominant parliamentary theme.  Although of relatively humble origins, the eponymous hero is elected MP for Loughshane through the support of his father’s old friend Lord Tulla.  His father urges him to merely dabble in politics and focus on building a more lucrative legal career, but Finn is seduced by a life in Westminster and the circles in which he is now moving.

He soon falls in love with the well-connected and winsome Lady Laura Standish, but she has to plump for the odious, but wealthy, Robert Kennedy after using her fortune to pay off her brother’s debts.  The ambitious Finn soon transfers his affections to the rich and mischievous Violet Effingham, who Lady Laura has in mind to marry her feckless brother, Lord Chiltern.  Although Violet loves Chiltern desperately, she repeatedly refuses his marriage proposals, fully aware that he would make a bad husband.  She also rejects Finn, knowing that her fortune means she enjoys more autonomy that Lady Laura and has no need to marry in haste.  Although Finn is unsuccessful in his suit, Lord Chiltern takes umbrage at the appearance of a rival and challenges him to a duel, from which he escapes with minor injuries.

Finn’s fortunes change when he is awarded a junior ministerial post, complete with modest salary, but he is eventually forced to resign his position due to his strong views on Irish tenant rights.  When a wealthy widow offers him her hand he is tempted, but decides instead to return to Ireland and marry his childhood sweetheart, thus forsaking his parliamentary career.

Although Phineas Finn is an effective protagonist, and the reader is introduced through his unworldly eyes to the heady atmosphere during the months leading up to the 1867 Reform Act, Trollope is at his best when drawing his female characters.  Lady Laura’s sense of helplessness when she finds herself trapped in a truly miserable marriage is poignantly conveyed.  As in many of his novels, Trollope addresses the iniquitous position of women in mid-Victorian society, but at the same time cautions them against rebellion.  Lady Laura finally manages to separate from the increasingly tyrannical Kennedy, but her social status is severely compromised and she simply exchanges her husband’s authority for that of her father.  She must also endure her estranged husband’s repeated attempts to legally enforce his conjugal rights.  Violet Effingham’s lively wit and fortune place her in a stronger position, but her wish to be an independent woman is met with scorn by those around her.

Other than a brief cameo appearance by Plantagenet and Lady Glencora Palliser, the only happy relationship portrayed in the novel is the eventual betrothal of Finn and Mary Flood Jones.  This forms a rather odd conclusion to the tale, as Finn’s return to Ireland and subsequent appointment as a Poor Law Inspector removes him from the centre of the action.  Elucidation is to be found in Trollope’s Autobiography, where he admits to having made a mistake after not having thought through his hero’s fate.  As the novel was originally serialised, he probably had to quickly think of a narrative expedient, without the option of going back and revising earlier chapters.  Unfortunately, the normally helpful Who’s Who at the end of the text refers to Mary as Finn’s first wife, which would tend to suggest how he later re-emerges in Phineas Redux.  That niggle aside, the Palliser novels, encapsulating as they do one of the most tumultuous periods in British history, are surely to be considered a truly great literary achievement.